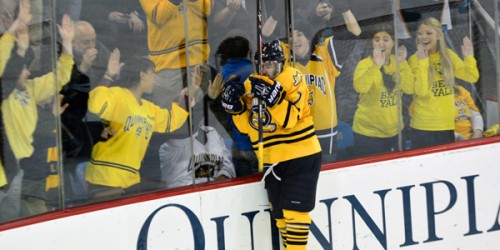 Rand Pecknold’s message to his team heading into the third period of Saturday night’s game against Yale was simple: stay composed.

The Bobcats had surrendered a two-goal lead in the second period, but Pecknold wasn’t concerned with the level of play on the ice.

“My message was ‘let’s let our character come through and kind of reload,’” Pecknold said.

Quinnipiac did just that, as Jordan Samuels Thomas scored to break the tie 4:20 into the third, and Bobcats went on to defeat Yale 5-3 in Game 2 of the ECAC Hockey quarterfinals at High Point Solutions Arena.

With the win, Quinnipiac completes a two-game sweep of Yale, likely ending the Bulldogs season. The Bobcats move on to the ECAC Semifinals next week in Lake Placid, N.Y.

Samuels-Thomas’ go-ahead goal made It 4-3 in the start of the third frame, coming off of a rebound seven seconds into a Bobcats power play.

“I thought we played better once we went up 4-3, and Yale was pressing a little bit,” Pecknold said. “I’m really proud of that power-play unit.”

Sam Anas added another goal, his second of the night, only four minutes after Samuels-Thomas’ to make it 5-3.

Anas got the Bobcats going only three minutes into the game, scoring his team-leading 20th goal of the season.

Connor Jones fed the puck to Kellen Jones in the slot, who backhanded it over to Anas. The freshman put it in the upper-right corner past Yale goalie Alex Lyon, making it 1-0 Quinnipiac.

The Bobcats scored again only 2:31 later, when Travis St. Denis tracked down the loose puck and backhanded it past Lyon. The goal was St. Denis’ third of the series, and stretched the Quinnipiac lead to two goals.

Yale responded, as John Hayden capitalized on a power-play attempt to make it 2-1. Tommy Schutt was called for cross checking at 13:58, and Hayden put a one-timer past Quinnipiac goalie Michael Garteig only 33 seconds later.

Schutt would make up for the miscue, however, as he scored only 2:40 later. Brandon Sherbinin’s shot deflected in front of the net, and Schutt was able to track it down and score with less than three minutes left in the first period, making it 3-1 Quinnipiac.

Yale would get back into things by way of two second-period goals.

Mike Doherty scored 2:56 seconds into the frame, cutting the lead back to one goal yet again. Hayden then scored his second goal of the game at 12:27 to tie things up at 3.

The goal was Hayden’s second of the game, and sixth of the season.

“I thought Hayden was one of our best players last night, and he was even better tonight,” Yale Head Coach Keith Allain said.

Samuels-Thomas’ third period goal would give the Bobcats the lead back. Anas’ second goal of the game, a snapshot from the left side, made it 5-3 with 11:20 left.

“Obviously beating Yale is fun, no matter what the circumstances are,” Anas said. “In a playoff series, ending their season, I couldn’t be happier right now.”