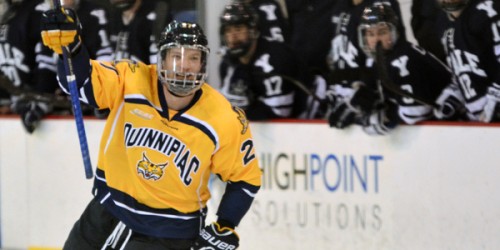 The Quinnipiac men’s ice hockey team opened up the gates on Friday night, scoring six goals against cross town rival Yale. The Bobcats pulled away with a 6-2 victory in game one of the Eastern Collegiate Athletic Conference quarterfinals. With the win, the Bobcats now are one win away from moving on to the ECAC semifinals.

Leading the scoring for Quinnipiac was sophomore left wing Travis St. Denis with two goals on the day. St. Denis, along with the entire team, came out to set an aggressive pace.

“We knew that they had to play some tough games against Harvard last week, so we had the mentality to come out and push the pace in the first five minutes,” St. Denis said.

The Bobcats kept that aggressive pace for the entire game, outshooting the Bulldogs 40-19 on the day. The Bobcats were constantly on the attack, and coach Rand Pecknold was impressed.

“We had a lot of jump tonight, and that led to a lot of opportunities,” Pecknold said.

The freshman class for the Bobcats was impressive in their first career postseason game in a Quinnipiac uniform. Five freshmen recorded point in the victory, including goals by Tim and Connor Clifton.

While the team is excited about the win, it is now looking forward to game 2, which is tomorrow night at 7 p.m.

“They are going to come out harder tomorrow, and we have to be ready,” captain Cory Hibbeler said.

The lone goal in the first period came from Tim Clifton five minutes into play. Clifton came into the slot and scored on the rebound of a Brayden Sherbinin shot to give the Bobcats a 1-0 lead. The Bobcats controlled the puck for the majority of the period, outshooting Yale 12-5.

The second period was quite eventful for both teams. Four goals and four penalties were recorded in the period. The Bobcats opened up the lead in the first half of the period, scoring three goals in the first 10 minutes. St. Denis hit in his first with a deflection of a slap shot from Zach Tolkinen from the right point to make it 2-0.

Connor Jones was the next Bobcat to put in the net. Devon Toews saved the puck from going offside and found a wide open Jones right in the slot who went five hole on Yale goalie Alex Lyon to make it 3-0.

Following a penalty from Yale’s Rob O’Gara, Bryce Van Brabant gave the Bobcats a 4-0 lead deflecting in another Tolkinen shot.

Yale attempted to make a run by capitalizing on a series of Quinnipiac penalties. Just 32 seconds after a Van Brabant boarding call, Bulldog Ryan Obuchowski blasts in a shot bring the lead down to three.

Just a minute into the third period, Alex Barron is called for tripping, and Yale’s John Hayden hits in a deflection off of teammate Stu Wilson’s slapshot to make the score 4-2, and gave Yale some momentum to make a comeback.

“All three penalties were stupid in that time period, and we need to be smarter than that,” Pecknold said about the fallback.

On a four on four, Jordan Samuels-Thomas found a streaking St. Denis who went five hole on Yale’s backup goalie Patrick Spano to make it 5-2.

Connor Clifton put the final nail in Yale’s coffin with a breakaway goal that went top shelf past Spano to give the Bobcats that four goal lead again.

Coach Pecknold is pleased with the victory, and the performance of his offense.

“We’re ecstatic to get the win tonight, we played hard and capitalized on our opportunities today,” Pecknold said.