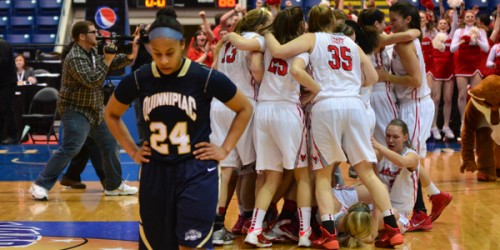 The No. 4 Quinnipiac women’s basketball team fell to No. 2 Marist 70-66 in the Metro Atlantic Athletic Conference championship game Monday at MassMutual Center in Springfield, Mass.

“When you’ve played in these types of games for four years now, they know what it takes to win them,” McQuain said.

McQuain led the Bobcats with 20 points and 12 rebounds, recording her 12th double-double on the season. Guastella came away with 16 points and eight boards for the team as well.

“I was really proud of our ladies’ efforts,” Quinnipiac Head Coach Tricia Fabbri said. “For much of the game, we played really, really well. It just obviously stings having that game not turn out in our favor.”

Marist was led by sophomore Sydney Coffey who scored 23 points, 16 of them coming in the second half. Seniors Casey Dulin and Leanne Ockenden chipped in with 14 and 12 points, respectively.

Quinnipiac trailed by three with 14 seconds left. After a timeout, Gillian Abshire came up the court, pulled up and missed a 3-pointer with nine seconds left. Before that, the team down one, McQuain turned it over and fouled Coffey, who made both her free throws.

The score tied at 64 with 2:18 remaining, Marist’s Tori Jarosz also hit a layup and split two free throws with under two minutes left to put her team up by three.

In the second half, the MAAC champion shot 15 for 24, holding its opponent to 10-of-31 shooting. Slowly chipping away at the lead, Marist took the lead with 5:45 left in the game on a Jarosz layup.

“It was a big deal,” Coffey said on the late run. “We needed to cut down the lead heading into the locker room and that’s what we did.”

Just over six minutes into the first half, Quinnipiac was down 16-10. Over a span of nine minutes, the Bobcats went on a 25-2 run. Marist capped the half on a 6-0 run which propelled them into the second half. The Red Foxes were 7-of-25 shooting in the first half.

Early in the second half, Gillian Abshire picked up a fourth foul, forcing Nikoline Ostergaard to run the show. Both coaches felt she played well at the point, but Abshire’s absence hurt the Bobcats.

“She’s a tremendous point guard and a big reason why we’ve had a lot of success over the year,” Fabbri said on why losing her early hurt.

Last season, the Bobcats made it to the NCAA tournament, receiving an automatic bid for winning the Northeast Conference tournament. McQuain reminisced on when she felt the team “had everything to lose” being on top. Fabbri noted there was disappointment with not being able to come away victorious.

“March 10 has been on our board in our locker room since September,” Fabbri said. “When you want something this bad, it should hurt.”