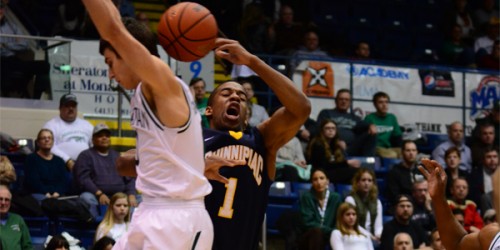 The No. 3 Quinnipiac men’s basketball team was unable to follow suit, as No. 2 Manhattan handed the Bobcats a crushing 87-68 defeat in the MAAC semifinals.

The Bobcats received the bulk of their offense from senior Ike Azotam, who scored 18 points and grabbed 10 rebounds, earning his 44th career double-double. Zaid Hearst scored 15, with nine coming from the free throw stripe. Kasim Chandler also contributed 14 points and seven assists with only one turnover.

After the game, Quinnipiac Head Coach Tom Moore reflected on the outcome of the match and the season as a whole.

“I’m disappointed for my kids,” an emotional Moore said. “In a specific case, because we didn’t get to play these kids with Umar Shannon.”

In two games against Manhattan, Shannon totaled 40 points, shooting 6 of 10 from behind the arc. Moore, noting that his poise as a leader was also dearly missed, was also disgruntled about something else.

Manhattan received significant offensive output from a few players. George Beamon, the team’s leading scorer, put up a game-high 25 points. Rahmel Brown scored 16 and came away with nine boards. Emmy Andujar, who averages 8.4 points per game, dropped in 21 for the Jaspers.

In the first half, Beamon shot 1 of 8 from the field with only two points. He shot himself out of the slump in the second half on 7-for-10 shooting.

Tied with Quinnipiac at 40 at halftime, Manhattan started the second half like they did the first: a scoring run. The difference was the Bobcats could not subdue it. Through nearly the first eight minutes of the half, the Jaspers outscored Quinnipiac 20-9. Beamon accounted for 12 of those points.

“I thought they played brilliant in the second half,” Moore said. “They’re playing great basketball at a great time of the year.”

Quinnipiac found themselves the recipient of an early slump, trailing Manhattan early 11-1. A 10-0 run to tie the game for the Bobcats was followed by a 9-0 run by their opponent. With 6:33 remaining in the first half, Quinnipiac tied the game thanks to Hearst making all five of his free throw attempts in that span. The teams would trade leads until halftime.

“It’s tough losing this game,” Azotam said. “We played good in the first half. Second half, we just didn’t score the ball good enough and we were a little rattled by their pressure.”

While the team will not be receiving a bid to the NCAA tournament, Moore hopes his team will continue to play in some form of postseason play.

“I’m extremely proud of the season we’ve had,” Moore said. “It couldn’t have been with a more high character group of guys. I’m really hopeful that we’ll get an invitation to the CIT or CBI; any postseason tournament so that I’ll have more time to work with these young men.”