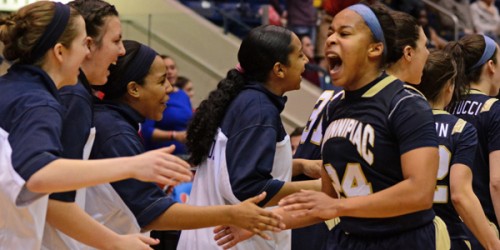 Last year, the Quinnipiac women’s basketball team made it to the NCAA tournament for the first time in program history. On Sunday, the team came one step closer to returning, defeating the No. 1 seed Iona 79-68 in the Metro Atlantic Athletic Conference tournament semifinals.

No. 3 Quinnipiac will play Marist Monday at 2 p.m. For Quinnipiac Head Coach Tricia Fabbri, she feels the team is ready for either opponent.

“I do not care who we are playing,” Fabbri said. “We’re thrilled to be staying here and playing again tomorrow.”

The Bobcat defense on Saturday was the deciding factor in the outcome. They held the Gaels below their season average of 74.1 points per game.

“Our defensive effort was just fantastic, defending their threes and transition,” Fabbri said. “We just went out and did what we do on offense. Everyone really played a big role.”

Two players for Iona shouldered the majority of the scoring load. Senior Damika Martinez made the most of her final chance, scoring 32 points with 26 coming in the second half. Joy Adams contributed 20 points in the losing effort.

The Bobcats took away the 3-point shot all game. Martinez and Adams found almost all of their opportunities from mid-range and inside.

“No we were not just content,” Fabbri said on if she was OK with letting her get open looks inside the arc. “She decided if this was the way it was going to end for her she was going to go out the gunslinger she is. Defensively, I didn’t have any issues with where we were and she made incredible shots that were contested.”

Martinez was named the MAAC Women’s Player of the Year for a second time. This season, she averaged a conference-best 24.5 points per game.

“To be honest, it doesn’t mean anything,” Martinez said of the honor. “We are out of the MAAC Championship.”

In the second half, the No. 4 seed found its offensive rhythm. From the floor, the Bobcats shot 18 for 31. A Martin layup and Guastella 3-pointer started a 9-2 run for the Bobcats, spanning just over three minutes. The largest lead they would accrue was 12, first reached on another Guastella 3-point shot with 8:15 remaining in the game.

They shot 24 of 32 from the free-throw line to maintain their lead in the final minutes of play. In the last two minutes of play, they converted 13 of their 14 attempts.

Early on, Quinnipiac struggled to make many shots at all. At the midway point of the first half, the team was shooting 2 of 18. At the end of the half, the score was tied at 24, the Bobcats only making eight of their 33 attempts.

“I knew we were going to get it together,” Martin said. “Sometimes the ball isn’t gonna go in the basket. You can’t think too much, you just gotta play.”