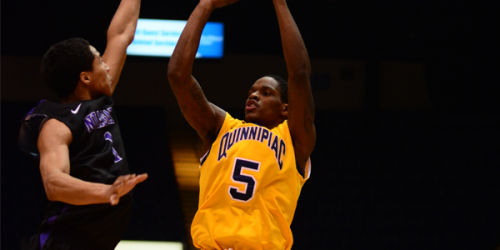 All five Bobcats starters scored in double digit points. Shaq Shannon led the way for his team with 20 points on 7-of-9 shooting from the field, 4 for 5 on 3-point shots.

“I was just taking what the defense was giving me,” Shannon said. “That’s what my coach told me to do so I just found open shots and I took them. I’m glad they went in.”

Kasim Chandler returned to the lineup for the first time since Jan. 30 after sustaining a foot injury. He came into the game with 12:34 left in the first half and played 14 minutes throughout the game. He scored one bucket on three shots, but was not a step behind athletically.

“Overall I was pleased,” Quinnipiac Coach Tom Moore said. “I thought there would be a little more drama involved with him coming back as a freshman playing through injury for the first time. Tonight he was mentally rusty, but physically he wasn’t rusty.”

“You notice the one guy that went 0 for 2 during that stretch was the freshman,” Moore said. “These older guys have been in the situation quite a bit. They go to the line very poised and very confident.”

Antoine Mason carried Niagara with 28 points, as the Purple Eagles found themselves up early on Quinnipiac. With 2:29 remaining in the first half, Shannon hit a 3-pointer and the Purple Eagles lost the lead. They would go on to trail the rest of the game.

The No. 11 seed came close to evening the score late in regulation. With only 2:39 left in the contest, Hearst fouled Mason on a 3-point shot. Mason made all his free throws and the Bobcats turned the ball over on the subsequent inbounds play, which led to a 3-point make by Wesley Myers.

Seconds later, Conti turned the ball over for Quinnipiac. Mason corralled the loose ball and was fouled. After missing both his free throws, Azotam took back the momentum by converting an and-one layup.

Sunday, the Bobcats will play Manhattan, who they met and defeated twice in the regular season. To Drame, that fact is irrelevant in tournament play.

“Beating them twice, we just have to keep that in the past,” Drame said. “We all know they’re a great defensive team so we have to make sure that we attack them and get early baskets. Hopefully we get energy from that to stop them on defense.”