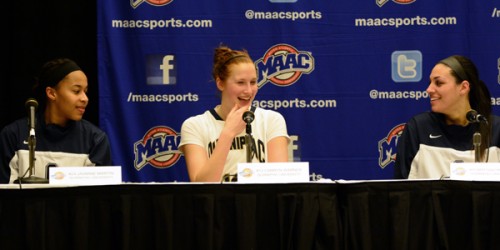 Four players for the Bobcats found themselves in double digits, led by senior Camryn Warner off the bench with 17, shooting 6 of 8 from the floor. Brittany McQuain chipped in a double-double with 13 points and 12 rebounds. The scoring output from Warner tied her career high.

“It’s my fourth year, my senior year,” Warner said. “I have nothing to lose out there. I might as well leave it all on the court. So I think I just went out there with a mentality to put the ball in the basket. That’s what I did.”

The Bobcats will face Iona on Sunday, the No.1 seed in the tournament. Earlier in the day, Iona defeated No. 9 Monmouth 71-56.

“I like the matchup,” Quinnipiac Head Coach Tricia Fabbri said. “These young ladies have always been excited for a challenge.”

Quinnipiac held its opponent to 22 for 58 shooting for the entire game. In the first half, however, the Golden Griffins only made eight shots on 30 attempts. At their peak, the Bobcats held a 25-point lead on their opponent. Noting that his team had missed a few open looks early on, Canisius Head Coach Terry Zeh felt that made the team become “a little tight down the stretch.”

In the second half, Canisius kept even pace with Quinnipiac. Kayla Hoohuli was the exception on a team that struggled to find its offensive rhythm. She scored 23 points and recorded four steals. Ultimately, the first half deficit proved too much to overcome.

“Our first 20 minutes against Canisius, we were so efficient on offense and really stifling on defense,” Fabbri said. “We were ready to go. It was evident in the way we started this game.”

Canisius attributed its offensive setbacks to the pressure Quinnipiac was applying this game vs. the regular season meetings. According to Hoohuli, they emphasized guarding high and taking away senior Jamie Ruttle down low, which forced the Golden Griffins to find other ways to score.

The Bobcats struggled with turning the ball over, accruing 19 giveaways. Missed free throws in the final minutes also prevented them from extending their lead.

“That cannot happen if we want success,” Fabbri said.

Despite the loss, Zeh feels his team had a successful season in the MAAC. They earned the No. 5 seed, a goal they set before play began.

“We had our backs against the wall and we had to answer in the big moments down the stretch and I think this group did it,” Zeh Said. ““That team [Quinnipiac] has had a lot of wins, so they know how to get them.”