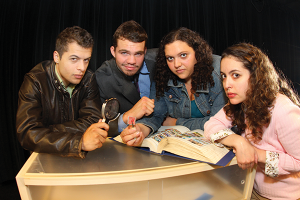 More than 30 plays were submitted to the Abingdon Theater Company in December by students and only seven were chosen to be in the festival, theater professor and adviser Kevin Daly said. More than 50 people auditioned for the seven 10-minute plays that had the same setting of a diner and the theme of decision making.

“Performing for an actual audience in New York City was unbelievable,” Junior occupational therapy major Aleczander Farquharson said. “The energy of the audience brings a whole new life to the show and being in New York made it all the better.”

For Daly, nothing he has ever experienced has been as rewarding as the New Play Festival.

“At one point I was able to sit in the back of the theater and I was watching the playwrights watch the audience watch their play,” Daly said. “And the energy of being in New York and performing for a sold out house is something you can’t often experience.”

Abingdon Theater Company has had a positive relationship with the university and conducts various professional workshops for students interested in theater, Daly said.

This year, Daly met with the Abingdon Theater Company in September to discuss the possibility of providing more options for theater students.

When the company mentioned a new play festival to Daly, he said he thought it was an excellent opportunity for students.

“Abingdon Theater Company’s mission is to work on new American plays and that is a part of our curriculum here at Quinnipiac that the theater department wants to expand upon,” Daly said.

The 34 students were hard at work throughout four weeks of rehearsals in the Black Box Theater before opening night.

As an advisor for the students, Daly said his job was to keep the process student oriented.

“I never once put on an artistic hat and told students what to do,” Daly said. “But I was always there in an advising role.”

Quinnipiac Theater for Community and the Abingdon Theater Company are working together to make the New Play Festival an annual event, Daly said.

Junior psychology and fine arts major, as well as a playwright for the festival, Samantha Chasse said she was at first timid to put her work out there, but does not regret her involvement in this experience.

“Being a playwright is so new to me and usually I don’t share my writing with anyone,” Chasse said. “But the whole group working on the festival made me comfortable with my choice to be a part of the experience.”

Involvement in the New Play Festival is not just for theater students and anyone of any major can take part in this experience, Daly said.

“Eight months ago, none of the shows even existed,” Farquharson said. “Playwrights, directors, stage managers, actors, designers and Kevin Daly all came together to create something that had never been done at Quinnipiac before, and it was honestly a blessing to a part of it all.”