The Student Programming Board makes its choice for the fall and spring concerts based on what the students are looking for, Stefano Fasulo, associate director of student center and campus life said. 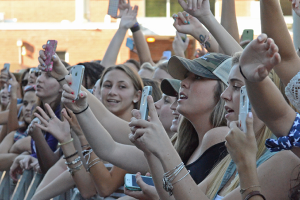 “There’s a lot of work that happens in the background that I don’t think students are recognizing,” Fasulo said. “We look at many concert agents, we look at trends, we look at the list of top 100s…But at the end of the day, we want to know from the students.”

The Mainstage committee sends out a survey at the end of the fall semester listing potential comical and musical acts SPB hopes to bring to the university in the spring, Fasulo said.

“We can take this list of potential performs and say, ‘Well, do you think you’ll be interested in any of these?’” Fasulo said. “We can get a gauge of which one would work best on our campus.”

The committee decides which performer to bring to campus strictly based on survey results, Mainstage Kristin Foley said.

“It’s not who I want, it’s who the student wants,” Foley said.

Foley said Mainstage tries to cater to the majority of student opinions, but also focuses on having diverse shows each semester.

“Quinnipiac’s pretty diverse, so there’s people who like different music,” she said. “Some genres are more popular than others, but we’re not going to do five rap concerts in a row.”

Even though the Mainstage committee tries to accommodate the most popular genres chosen on the survey, Fasulo said the decision process comes with complications.

“I would love to see a higher response rate [with the survey],” Fasulo said. “I say that because then we can make a better informed decision of what we can bring on campus.”

Foley said some students have complained about Capital Cities, the Wake the Giant Spring Concert act, since most people only know one song by the band.

However, freshman Tiffany Green said she likes exposing herself to new music.

“I already bought my ticket [to the Capital Cities concert],” Green said. “I’m really into music and stuff like that, so I kind of like just finding out about new bands.”

Aside from hearing new music, Foley said there are other upsides to this spring’s concert.

“Tickets are only $10, there’s nothing else to do that night, there’s no shuttles to New Haven,” Foley said. “Take a study break for three hours, come out and have a last hoorah with your roommates before summer.”

Freshman Alex Collins said he thinks SPB could have booked a more popular group to perform at the Wake the Giant Spring Concert.

“When you follow up with Kesha and B.o.B., who are obviously like way bigger artists, we were kind of expecting a little bit more of the same,” Collins said.

Foley understands not everyone will be happy with the performers.

“The people who are complaining or don’t want to go, that’s your own choice,” she said. “Also be aware that Quinnipiac is diverse community; we’re not going to be able to please every single person on campus.”

Fasulo said SPB cannot please all students, but the organization strictly programs for the undergraduate population.