Dancing for those who can’t

When junior Ryan Laguna, president of Delta Tau Delta, attended Quinnipiac’s first QTHON in February 2012, he viewed it as “just another philanthropy event.” 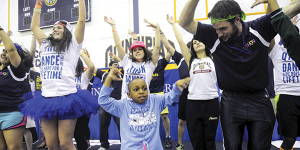 “I didn’t really get it at first,” Laguna said. “But what makes QTHON different is that you actually see what you’re changing and who you’re helping. You meet the families with young kids who come to the event and share their stories, and that’s when it really hits home.”

QTHON is a six-hour dance marathon organized by Delta Tau Delta. It is part of a nationwide student-run movement involving more than 150 schools who support Children’s Miracle Network hospitals.

“I think QTHON 2014 was hands down the best QTHON yet,” Laguna said. “We more than doubled our participants from last year and we exceeded our goal of $30,000.”

The last QTHON was in December 2012 and had 250 participants, Laguna said. The organization raised $20,100 for Connecticut Children’s Medical Center that year.

“The way I always try to describe this event to people is ‘it’s not an event, it’s a feeling,’” Laguna said. “It’s something you really have to experience in order to get the full impact of what it does.”

The event raises money for “miracle families” at Connecticut Children’s Medical Center who cannot afford treatment for their children. Eleven families were present at this year’s QTHON to share their stories of how CCMC changed their lives.

The families’ children range from 3 to 11 years old. They are currently undergoing treatment for diseases such as cancer and scoliosis. 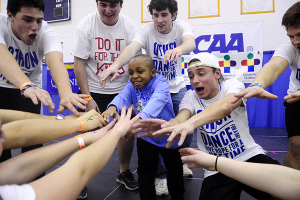 “It’s amazing, seeing these kids and seeing how much optimism and energy they have,” said senior Nicole Sparapani, hospital and family relations chair. “I look at my childhood and everything that I’ve experienced, and I just want them to experience that too… At QTHON, we dance for those who can’t.”

The QTHON coordinators worked with Scott Organek, a representative from CCMC, to organize the event and find 15 sponsors from local businesses and organizations on campus.

Senior Allison Clemmey attended QTHON because her sorority, Alpha Delta Pi, was one of the event’s sponsors.

“I think [QTHON] is a great way to support kids who are suffering terminal illnesses,” Clemmey said. “It really puts everything in perspective and makes you realize how fortunate you are.”

Junior Grace Rivera-Owen, co-chair for QTHON’s dancer relations and a member of the management team, was one of many students who said they were emotionally affected by the event.

“I know it’s a Saturday night and you’re giving up six hours of whatever else you might be doing,” Rivera-Owen said. “But it’s so amazing seeing those kids in there dancing like that and seeing their faces light up. They’re not afraid to high-five or dance with you. You can see that you’re making a difference in their lives.”

The coordinators of QTHON said they hope to see the event grow in future years.

“The only way CCMC can keep its doors open and help as many families as they do is by these dance marathons and the generous donations made to them year round,” Laguna said. “QTHON 2015 will be bigger and better than this year. Everything we have ever done and will always do is for the kids.”