Patti Floum was asleep at 11:30 p.m. last Monday when her phone rang. It was a maintenance worker at the Aspen Glen Apartments, telling her Building 3 in the complex was on fire. 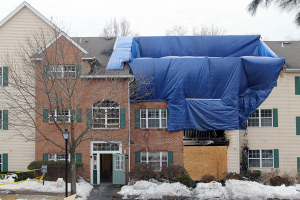 Not bothering to change out of her pajamas, Floum, the Regional Property Manager at Aspen Glen, threw on her snow boots and rushed in her car to the apartment complex. She stayed on the phone with the maintenance worker, and learned the building had been evacuated within minutes and no one was injured.

“My biggest concern was the students and the rest of the occupants, that they were OK,” Floum said.

The fire started because a resident dropped a cigarette near the building, Floum said. Police told Floum the resident was intoxicated, she said.

The experience was “horrific,” Floum said.

“As you can imagine, it’s devastating,” she said. “I never experienced a fire like that on our property.”

The building was evacuated within minutes and the fire safety systems worked properly, Floum said.

“All the fire equipment responded perfectly,” she said. “The sprinklers went off, the alarms went off, the fire doors closed. Everything happened exactly as it should have.”

Students who lived in Building 3 spent Monday night with friends or on the York Hill campus, where the university offered housing to displaced students.

“There were quite a few Quinnipiac students in the affected building,” Floum said. “They have all been beautiful. I mean, they understand the problem, they’ve all been patient, they’re smiling. It’s really very heartwarming how they’re all behaving through such a tragedy.”

Building 3 has two hallways, Floum said. Only one unit on the right-hand-side hallway was affected by the fire, and the residents on this side of the building could move back into their apartments on Thursday, she said.

The residents on the other side of the building, whose apartments were damaged more by the fire, were reassigned new units, Floum said.

To restore the building, J.P. Maguire Property Damage Cleanup and Reconstruction of Wallingford will use dehumidifiers and fans to dry out the units that have water damage, owner Jim Maguire said. Maguire estimates about 10 to 15 units had water damage.

“[The units] can be salvaged and the carpet may not even need to be replaced if we get the water out immediately,” he said. “So it’s prudent to be expedient.”

The company will build a temporary roof and then gut about five of the units in Building 3, Maguire said. This will take about six to nine months, he said.

“We’ll remove everything that’s burnt and damaged and anything that’s left,” he said. “We’ll deodorize it, make sure that there’s no smoke smell and then basically at that point it’s just like a regular construction job.”

The dry wall, electrical wiring, some of the plumbing, the trim, the interior doors and the carpets will be replaced, Maguire said.

“We really handled it beautifully,” Floum said. “I couldn’t imagine it going any smoother than it did.”