Leaks were found on some buildings on campus last week due to melting snow; however, most of the leaks are now under control, according to Associate Vice President for Facilities Operations Keith Woodward.

“When you have this much snow and then you get the melting, I mean, it’s almost a normal course of action,” Woodward said.

Facilities will continue to fix problems caused by melting snow around campus.

“The roof leaks will be looked at once the snow is off the roofs,” Woodward said. “And the facilities staff can move around safely on the roof and with clear line of sight to the areas that have reported leaks.”

In the Athletic Center, snow came through one of the HVAC units, Woodward said. The roof leaked in the faculty office building and the Crescent residence hall. Students in two apartments in the Hill residence hall also experienced leaks, according to Woodward.

Sophomore Anne Noordsy lives in one of the apartments in Hill where melting snow flooded the floor in her common room.

“We called facilities and they took forever to get back to us,” Noordsy said. “All the workers at the same time were on their dinner break and you know all our parents were calling, like, ‘You need to go to our daughters’ room and fix this. This is not good.’”

Facilities fixed the problem in Hill over the course of a few days, according to Noordsy.

“When [facilities] got there they just were pretty rude,” she said. “I don’t think they were working to fix the problem immediately.”

In Hill, there was a hole in the fascia board, which caused the leaking, Woodward said.

Facilities closed the hole with a temporary fix, he said. Over spring break or the summer, facilities will put a permanent fix on the hole and check the other rooms to make sure there are no other holes.

Noordsy said nothing in her suite was damaged.

“I was just afraid that [my suitemates’] ceiling downstairs was going to collapse,” she said. “Our RHD was like ‘You may have to move out because it isn’t really safe,’ so I didn’t want to have to do that. So it was just kind of stress on top of schoolwork and everything.”

On the sixth floor of Crescent, water is leaking from the ceiling in the hallway. Facilities has set up a trash bag and and trash can to collect the water. 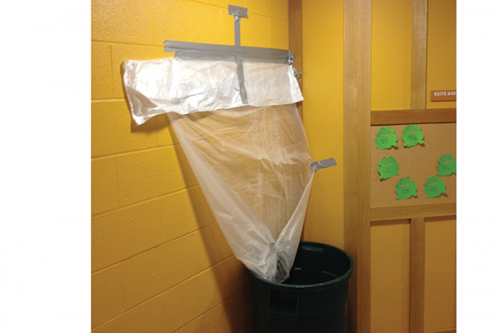 Junior Rachel Guketlov lives next door to the leaking ceiling in Crescent.

“I was in the study room and I walked out and I see literally water everywhere and I was really confused,” Guketlov said.

Guketlov said there have not been any damages to her room.

There are a couple stains in the ceiling of the Faculty Office Building because of leaks caused by melting snow, according to Director of the Interactive Media Graduate Program Phillip Simon, whose office is in the building.

“[The leaks] seem to be a common problem,” Simon said. “I know they’ve been on the roof looking at it and I think facilities is well aware of the problem. It’s a flat roof and flat roofs are hard.”

The leaks are mainly in the hallway, according to Simon. Simon said he is “lucky” that melting snow has never leaked into his office.

The facilities department is doing its best to minimize the leaks around campus, Woodward said.

“We can get up on the roof to clean out the roof drains to make sure all the water is draining to the proper locations,” he said. “When if the water enters the building, we need to go into the building and evaluate the situation, try to make the repairs that we can inside the building.”