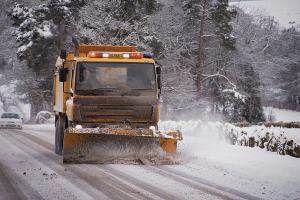 Quinnipiac is stuck in a winter wonderland. Despite all of the accumulated snow over the course of the past month, Quinnipiac’s landscape maintenance crew has truly done an incredible job clearing the snow and making conditions safer for students.

Taking care of the school’s campus undoubtedly equates to very early mornings and a lot of draining physical work. The crew works hard as the rest of the university continues to sleep into the early morning hours. More often than not, maintenance workers are forced to deal with the snow even as it is rapidly falling. I have the utmost respect for those who work to maintain all of Quinnipiac’s campuses.

However, there is one problem that seems to bother every York Hill resident in regards to the snow cleanup crew. On numerous occasions many students, including myself, have been woken up early in the morning, usually around 7:30 a.m., to an extremely loud noise that is able to penetrate through windows and walls. As many of us have figured out, the noise is due to the snow plows scraping the pavement, resulting in a horrific noise that resembles nails scratching a chalkboard. The sound is annoying, loud and inescapable.

Being abruptly woken up never results in a happy morning for anyone, but this isn’t just about a noise suddenly waking students up. Students are unable to go back to sleep long after they’ve woken up from the plows. The noises from the plows continue all morning, so the chance of getting a few more hours of sleep before class is nearly impossible. The sound of the plows scraping the pavement is a noise that is extremely difficult to ignore.

Some might argue that this is not something that should be complained about and that the crew is just doing its job and normally I would agree with that. However, the noise is at its worst when there is no longer any snow left to plow. If the path is already fully plowed, then why are crews continuing to plow them? I don’t necessarily understand it, but who knows, maybe there’s more to snowplowing than I realize.