Rave: Orange is the new black

Almost every college student has been posed with the problem of running out of things to watch on Netflix. Well, worry no more! The popular site has just recently announced the return of the series “Orange is the New Black.” Fans everywhere anxiously await the new episodes that are scheduled to be posted on June 6. 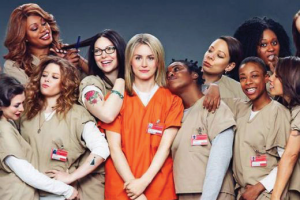 The show follows main character Piper Chapman a privileged “WASP” into prison, virtually the last place anyone would expect to see her. Along the way, viewers are introduced to other inmates who allow for an interesting mix of characters. For the most part, the actors featured in the show are not well known, however, Jason Briggs, who starred as Jim in “American Pie,” is featured as Piper’s fiancé. Each storyline introduced is interesting and comical. In an all women’s prison one can only imagine the drama that takes place but each episode is equally as shocking as the last.

Netflix has created a trend of “binge watching,” in which people watch multiple episodes one after another. “Orange is the New Black” is the perfect candidate for a rainy day with no prior plans made. The episodes are 50 minutes long and the best thing about them is that there are no commercials. Season one was a huge hit and only contains 13 episodes so it’s not completely impossible to watch all in one sitting, because it is just that good. Similar to the shows found on HBO there are not many boundaries the writers aren’t willing to cross, this is what makes the show so intriguing.

If nothing else, “Orange is the New Black” can give insight as to what it can be like in prison, and how one stupid mistake of holding a suitcase of drug money can land you in the slammer 10 years later. Netflix has truly outdone themselves with the original series “Orange is the New Black.” The show is worth investigating especially if the snow and rain continue.