The music industry will always be faced with the challenge of keeping up with ever-evolving technological advancements and changing listeners’ preferences. With the digital age, the industry was thrown into a state of turmoil as record companies scrambled to remain profitable, and artists relied almost completely on concert ticket and merchandise sales to make money. In 2014, the music industry is finally discovering a silver lining in their nightmare of a gloomy future. 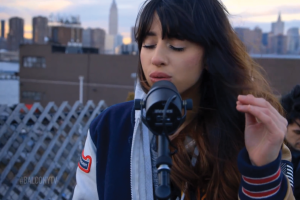 Focusing more on brand and artist promo, and creating strong personal relationships with fans, the industry is fighting back. Spotify, iTunes, SoundCloud, VeVo and Pandora have fueled this intense comeback, and although record companies are not directly reaping the full record sales as they did in the past, the number of records to hit a million units sold increased from 10 to 13 in the last quarter of 2013. Some critics will argue that online music platforms such as YouTube are allowing what would be sales for record labels into a streaming paradise for users.

Technology has made music readily available with the click of a button, and when you have such an immense access to music, it only seems fair to believe that more music in general is being listened to and therefore; the job of the record labels is more vital than ever. Another undeniable fact is that today’s music makers are extremely talented as writers, producers and entertainers. The future has “nothing but tremendous possibilities, great ideas and extraordinary music that will continue to inspire people.” Ah, now that’s a beautiful sound! On that note, presenting a new upcoming artist whose music will inspire you.

Foxes’ music is about to blow up everywhere. After winning a Grammy for her collaboration with Zedd on “Clarity,” Foxes’ own unique personality is taking off on her recently released singles, “Holding Onto Heaven” and “Let Go For Tonight,” and she proves that she has what it takes to soar. What makes her music so pure is her passion. Lousia Rose Allen in an interview with Billboard Magazine said, “My music that’s my baby, and at the end of the day, that’s the most important thing to me” (Billboard, Jason Lipshutz).

Emily Misiewicz is a senior marketing major from Southbury, Conn., who is very passionate about music and the future of the industry. She has interned for Sony Music Entertainment in RCA Records and Legacy Recordings, and writes a music blog called “The Music Dose.” Misiewicz believes love for music connects people around the world, and with her blog hopes to introduce listeners to new music that will bring them joy. “Music’s the only thing that makes sense anymore, man. Play it loud enough, it keeps the demons at bay.”