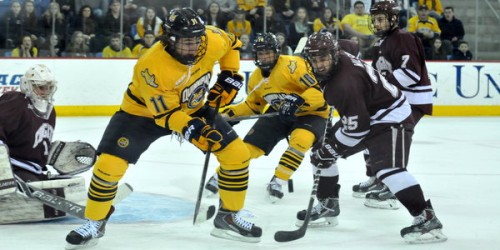 After a pair of losses at home coming from the hands of Cornell and Colgate, the Quinnipiac men’s ice hockey team is beginning to find itself in rough waters.

In front of 3,554 at TD Bank Sports Center Saturday night, the Bobcats fell to Colgate, 3-1. Tylor Spink recorded two goals for the Raiders, including the game-winner at 10:08 of the third period. With the loss, Colgate jumps Quinnipiac in the ECAC Hockey standings, as the two teams were both 11-5-3 coming into the night.

In its past seven games, Quinnipiac has gone just 2-5, a stark contrast to the 13-game unbeaten streak the Bobcats put together between October and November. Combined with Quinnipiac’s Feb. 8 loss to St. Lawrence, Saturday marked the first time since December 2010 that the Bobcats have lost three home games in a row.

Injuries haven’t been kind to the team, either. Quinnipiac has been without Jordan Samuels-Thomas, who has notched 27 points this season, since the St. Lawrence game.

“We don’t want to make excuses,” Quinnipiac captain Cory Hibbeler said on the team’s injuries. “Everyone gets beat up during the season. We’re just gonna have to deal with them.”

The team also lost Connor Clifton midway through the second period, when the freshman was handed a game misconduct for a kneeing penalty.

“We couldn’t find a way to score, we had great chances,” Quinnipiac Coach Rand Pecknold said. “Two goals waved off tonight. Sometimes you get bounces, sometimes you don’t.”

Quinnipiac had 21 grade-a chances, coming via 32 shots on goal.

Pecknold, however, is still optimistic. Quinnipiac will head to St. Lawrence and Clarkson next weekend searching for wins.

“I was really impressed with the battle level,” Pecknold said. “We were shorthanded tonight. Just couldn’t find a way to score an extra goal.”

Colgate opened the scoring at 9:14 of the second period. After Clifton tripped over his own stick and was unable to recover, Spink walked in and fired the puck over Garteig’s right shoulder.

Less than a minute later, Connor Jones tied the game via a deflection. Devon Toews sent a cross-ice pass to Matthew Peca on the near side, who put the puck on net. Jones then skated in and redirected the shot past goaltender Charlie Finn to tie the game at 1.

Spink notched his second goal of the game midway through the third period. After getting the puck on the doorstep, Spink caught Garteig going for the poke check, later firing at the open net.

“He’s got so much poise with the puck,” Colgate Coach Don Vaughan said. “For a small guy, he protects it so well. He was in the zone tonight, I thought he played a really solid game.”

Darcy Murphy would add an empty net goal with 1:07 left in regulation.