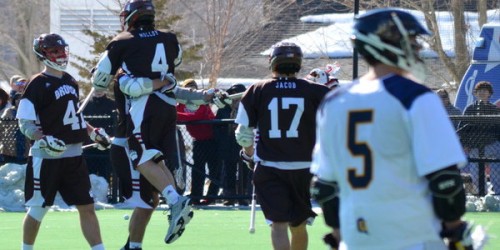 The Bears were given a major lift from goalie Ryan Kelly. He tallied 18 saves from 24 shots on target in a game where Quinnipiac Coach Eric Fekete felt he played well.

“He’s probably as hot a goalie we’ve seen in some time,” Fekete said. “I kept telling the guys all game to just keep shooting, but he made saves where he needed to.”

Brown set the tempo early and did not lose its lead the entire game. It took a 2-0 lead in the first period with Dylan Molloy scoring the first of his four goals less than three minutes in. Kylor Bellistri scored the second with 1:56 left in the first.

The Bobcats evened up the score with Ryan Keenan and Evan Weldon scoring early in the second quarter. After those scores, Brown rattled off six unanswered goals, including three in the beginning of the third quarter within a 2:15 span. That scoring run became too much for the home team to handle.

“The first half was a good game,” Fekete said. “The momentum swing was they scored those quick three right in the beginning of the third.”

“He’s been injured,” Fekete said on the decision to sit Conners. “We talked about playing him for 30 minutes. He is just kind of on the recovery trail and we will merge him in more and more.”

Quinnipiac would go on to score three more goals in the third quarter and its final score in the fourth. Keenan was the only player for the Bobcats who scored multiple goals with two.

The loss Saturday was an unfortunate way to start the season for a team that has had much success, but Fekete was not overly concerned with the result.

“I think the loss hurts,” Fekete said. “This group doesn’t like to lose and we’re not accustomed to losing a lot, but it’s early in the year. It’s the first game out of 14. I told the guys we can’t change it once its over. Focus on the mistakes you made for a couple of days then get into our next opponent.”

That opponent is Providence, where the team will travel next Saturday. Despite only scoring six goals, Fekete is not worried about the offense. Rather, he wants his team to execute better.

“I think we need to shoot a little better,” Fekete said. “But, again, their goalie played really well, so probably just limiting the mistakes. We just got to work on getting better all the time. This is a journey we are on. It’s the first day and it takes some time to get it right.”