Each morning, Chief of Public Safety David Barger watches the news in his office. He is not procrastinating; he is looking at what is going on around the world to learn how Public Safety can better react to emergency situations. 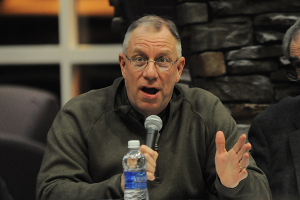 “We monitor what’s going on, not because that may have a direct effect on us,” Barger said. “But we keep an eye on it because everything is a learning process.”

“It’s a big ball of wax,” Barger said. “But you look at every aspect of what occurred and you dissect it to find out: how can you do it better?”

Each of those incidents was different, so they called for different responses, Barger said.

The incident at Yale, when the university received a report of a suspected gunman on campus, occurred on the Monday of Thanksgiving break, so most students were not on campus.

Yet, most students were on campus when Central Connecticut State University went on lockdown after students thought they saw a man carrying a gun on campus in November.

This means Public Safety must study these different variables, according to Barger.

“What you have to do is look at the different situations and how they were handled because of the population they had [and] where they occurred,” Barger said. “There is no one perfect answer because there is no particular incident that would take place that was perfect.”

In December, Barger went to a meeting at Yale University attended by Yale, Manchester Community College, University of New Haven, Central Connecticut State University, state police, the FBI, West Haven police, New Haven police and others who had responded to the emergency situations at the four colleges.

“I think [it’s] a good idea to get ideas and go elsewhere to see how other people handle situations to give a better idea of us and what we should do too,” sophomore Michelle Fusco said.

At the meeting, the officials discussed emergency protocols, Barger said.

“[We’re] looking to actually put together sort of [an emergency response] program that, for lack of a better term, we would be able to codify statewide,” he said. “We brought back to Quinnipiac quite a bit of good information.”

Sophomore Alexa Farrell said what happened at these other universities could happen at Quinnipiac.

“Learning from what [the other universities] did right and what they did wrong is really important,” Farrell said. “That’s the best way to keep our students on our campus safe.”

Barger compared preparing for an emergency situation to taking a test.

“You don’t take an exam without grabbing every bit of information you can,” he said. “We want to have information on what happened at other places, how we can utilize that information to help us, put us in the right direction.”