More than 200 apply for orientation leader

The spring semester is a time of year for new opportunities for students and applying to become an orientation leader for summer 2014 is one of the most coveted positions, according to the Associate Director of the Student Center and Campus life Erin Twomey. 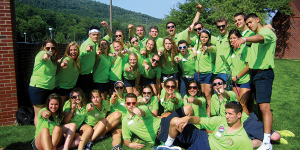 Twomey said the average day of an orientation leader is 15 hours long and requires “a lot of hard work” along with dedication to the incoming freshmen class.

The orientation program has been around for 24 years and this is the second year students will be paid $1,500 for their contribution to the community, according to Twomey.

Twomey hopes being an orientation leader will continue to be more about helping freshmen than about the money.

“It’s nice to give the orientation leaders something beyond clothing, food and housing,” Twomey said. “It has definitely opened up the application pool. But two years previous, when it was voluntary, we had almost as many applicants as we did last year.”

Twomey said that if you want to be an orientation leader for your own personal benefits, then you are “applying for the wrong reasons” and it will show throughout the selection process.

“It’s a selfless position. You give up a lot of time over the summer in order to help incoming students feel comfortable and acclimated to our community,” Twomey said. “It can be very tiring at times and you have to have the right mindset to do it.”

Junior Christopher Aldarelli said he considers the four weeks he spends in the summer at orientation as “the best times of [his] life.”

“You need to truly love Quinnipiac to want to devote three to four weeks of your summer to the over 1800 incoming students,” Aldarelli said. “I will always cherish the memories I have made with the program.”

In order to be selected as an orientation leader, Twomey said students should be open-minded, adaptable and must be able to work well in group situations.

Freshman Donovan Sepulveda said he was inspired to apply as an orientation leader soon after he realized how much fun he had at his own freshman orientation session last June.

“After going to my own orientation session and seeing how welcoming the orientation leader’s were to us, it made me want to give that same experience to the new class of incoming freshman,” Sepulveda said.

Twomey said being an orientation leader is a unique leadership opportunity and most students change for the better after being involved in the program.

Senior Angela Romano said becoming an orientation leader was one of the “best decisions of [her] life.”

“Being an orientation leader has allowed me to take giant steps out of my comfort zone and has pushed me to be the person that I have always wanted to be,” Romano said.

As an orientation leader junior Kelsey Goode was reminded why she wanted to attend Quinnipiac in the first place.

“You fall in love with the program,” Goode said. “The freshmen become the people that remind you every single time you see them why you love this school and why you spend half your summer trying to convince every incoming freshmen why they should too.”