Bald for a cause

Cancer-survivor Frank Porzio, a junior, was among the more than 100 people who shaved their heads to raise awareness for childhood cancer at Student Programming Board’s St. Baldrick’s event Monday night in Burt Kahn Court. 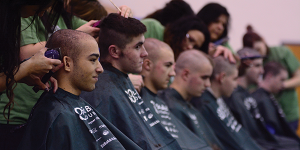 “It just shows moral support for the kids going through [cancer],” Porzio said. “I think the event brings a lot of people together without them really even realizing it.”

Several of Porzio’s fraternity brothers in Sigma Phi Epsilon shaved their heads to show their support, as well.

“We all just realized that it’s an important reason, so we all just came out to support it,” Porzio said.

SPB teamed up with the St. Baldrick’s Foundation, an organization that raises money to find a cure for childhood cancer, and raised $9,440 as of Monday at the sixth annual event.

“It was a really good time,” SPB Arts and Entertainment Chair Sarah Dors said. “Cancer’s something that is near and dear to everybody; everybody knows somebody who’s gone through some sort of cancer, so I think [this event] is just a way that we can all come together for a really great cause.”

Prior to the event, students sign up to get their heads shaved and ask for donations from family and friends. Students’ fundraising goals can range from $50 to several hundred dollars.

This year’s fundraiser was organized by senior Genevieve Bregoli, SPB’s Traditions and Community chair. Since October, she has been working with a California-based St. Baldrick’s representative to put the event together.

“It’s always an emotional event just because it’s such a great cause, and it’s always great to see the community coming together to support one another,” Bregoli said.

Senior criminal justice major Gavin McKay said he shaved his head because he supports the message it sends to the Quinnipiac community.

“There’s something really cool about having everyone with their heads shaved; it’s sort of like a sign of solidarity,” McKay said. “I know [cancer] affects a lot of people and I’m sure everyone has a story that they can relate to in some way, shape or form.”

Bregoli said she “definitely” considers St. Baldrick’s to be a cause worthy of student support.

“There’s always a different crowd because different people hear about it every year, but it’s centered around the same basic concept: to support cancer research,” she said. “Whether you sign up to get your head shaved or just to volunteer, every bit of support counts.” 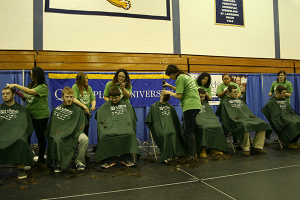 McKay agreed, saying the event has grown significantly since the first one he attended four years ago.

“When I was here as a freshman, the crowd was half as big, but now it’s huge,” he said. “I think everyone can really stand behind that message that we need to stand up to children’s cancer.”