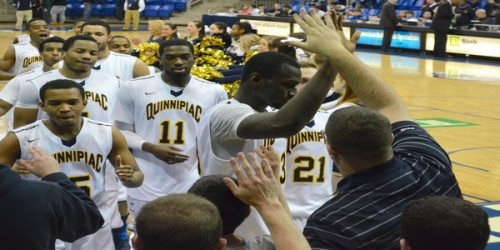 The Quinnipiac men’s basketball team evened its score with Rider on Saturday, defeating the Broncs 82-61 at home after losing to them on the road earlier this season.

Forward Ike Azotam led all scorers with 21 points and also added 12 rebounds to notch the double-double. He was among five other players on the team who were in double figures for points.

This win marks the first ever victory for the Bobcats against Rider. The two teams have met three times before, including back in December at Rider when the home team handed Quinnipiac its first conference loss of the season.

“We really focused on some of the things we didn’t do well back in December,” Quinnipiac coach Tom Moore said. “We weren’t strong or tough enough on three of their best players: Daniel Stewart, Jimmie Taylor, and Anthony Myles.”

In their last outing, the three said Broncs each scored at least 20 points. On Saturday, they were held to a combined 34 points.

“We really tried just to focus on those guys,” Moore said. “I commend the guys who primarily did a good job on them. I just thought that was key.”

An area the Bobcats excelled was on the offensive glass. Out of their total 44 rebounds, 23 of came on offense. The Broncs were out-rebounded by 14 after being dominated on the glass by Marist the game before.

“Last couple games we haven’t been on the glass like we wanted to,” Azotam said. “Coach was preaching they lost on the boards in their previous game. We just wanted to set the same type of tempo today.”

Quinnipiac also had an impressive day from downtown, shooting 9 for 16. Moore does not consider his team a great shooting team from deep, but believes it is tough to beat when it is sinking shots.

One 3-pointer came from guard Zaid Hearst on the baseline with four seconds left in the first half. That bucket capped off a 10-0 run that propelled Quinnipiac into the second half.

“It just happened,” Hearst said. “I was open and I shot it and made it. I thought we had momentum right there but I felt like that three gave us even more momentum in the second half.”

Junior Evan Conti provided a solid lift off the bench with 10 points, four rebounds and four assists. Moore alluded that despite a tough start to the season, he has steadily improved and earned more minutes.

“He’s like the energizer bunny: he’s always ready,” Moore said. “He is such a tough-minded kid; he wants to prove so many people wrong. He carries that as a chip on his shoulder into every practice and into every game. We’re really fortunate to have him.”

Quinnipiac’s next game is against Marist, the first between of two this season. Tipoff is set for Monday at 7:00 p.m.