Master on the court 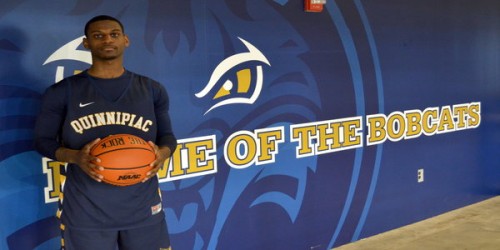 A transfer student typically must wait some time before he or she makes a significant impression on his or her peers. Quinnipiac men’s basketball guard Umar Shannon has wasted no time earning the respect and admiration of his teammates.

Shannon, who graduated from Saint Francis University in 2013, had one year left of playing eligibility to play basketball after sitting out a season with an injured knee. In the pursuit of his master’s degree in sports journalism, he chose Quinnipiac to earn his degree and finish his collegiate athletic career.

“When I came up here what really sold me was the master’s program,” Shannon said. “The people were great. I felt like it was a home away from home.”

Shannon had caught the attention of Quinnipiac head coach Tom Moore while at Saint Francis, when both teams were members of the Northeast Conference. He was a constant back-court threat with his scoring ability, which Moore found as an invaluable asset for his team.

“One of the biggest things we lacked a year ago was talent and shot making in the backcourt,” Moore said. “We needed depth. Someone with his ability and his experience to come on the market that late I thought it would be a home run for us.”

Umar’s talent is immediately evident for the Bobcats. He averages 14 points per game, second in backcourt scoring behind Zaid Hearst, who scores 15.4 points every outing.

But Shannon’s play is only one area where he has proven himself. While Moore was scouting his new transfer last spring, he only heard praise from former college and high school coaches.

“Everyone spoke so highly of him as a young man,” Moore said.

His character has rung true in more places than just on the court. Umar has the highest GPA on the team, according to teammate of no relation Shaq Shannon. Moore and teammates rave about his leadership skills, which come from his experience as an athlete. He has transitioned quite smoothly because of his selfless nature, according to Moore.

Umar Shannon has become especially close with one player in particular, freshman Kasim Chandler. A point guard, Chandler shares similar roots with Umar. Both hail from urban areas of New Jersey: Umar from Atlantic City and Chandler from Newark. Each bounced around the cities they were from, but Umar considered that helpful in his evolution as a player.

“There were a lot of good players from the area I was from,” Umar said. “I had the luxury of living probably in every area of Atlantic City so all the good players I had got the chance to imitate and do some of the things they were doing took my game to the next level.”

Chandler, however, was in search of guidance and basketball was what put him on the right path. Moore, noting that Chandler had come from “a few unstructured high school situations,” feels Umar has been the perfect role model for the freshman talent.

“It’s fascinating to watch Umar,” Moore said. “Umar has somewhat taken him under his wing, which I think is such a great role model for Kasim to see how you handle yourself as a college athlete. I think he has had the most impact on Kasim and it’s sped up Kasim’s maturity quite a bit.”

Chandler feels that the relationship he and Umar have is “like a big brother to a little brother.”

“He helps me a lot when I’m feeling down,” Chandler said. “He always has great words to say to lift me high. He is always just trying to shape me into becoming a better player in the future. He does a great job with it.”

Umar has used such leadership, along with his talent and work ethic, to help solidify the Bobcats as a legitimate contender in their first year as a member of the Metro Atlantic Athletic Conference. With a 7-4 conference record, the team has nine straight games against MAAC opponents with the end of the season nearing.

“All those nine games count,” Umar said. “We just need to stay hungry and be humble. We’ve had some success, but we can’t get too high or too low. It’s on us to be hungry and be tough.”

Umar knew that in order for his team to succeed they would have to accept him. He did not want to use his experience to demand respect, but rather find what role would best serve the team.

“I fit in well with the guys,” Umar said. “It wasn’t me trying to come here and do something I wasn’t capable of, but trying to do something to fit in. I was a good fit and that is why Coach Moore reached out and tried to get me here.”

“I thought he would be perfect for what we were looking for,” Moore said. “It’s been a terrific match, bothways.”