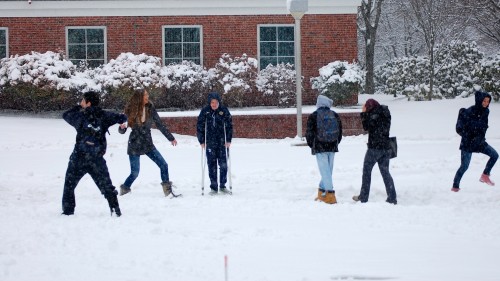 Students are packing books back into bags and making their way back to their rooms to snuggle into bed now that the university is closed for the day. The Chronicle went around and asked students what they have planned for the rest of this Instagram-worthy weather.

Most students plan on getting ahead on homework and studying, like freshman Laura Lerner.

“I’ll probably just study since I have a lot of work to do,”  she said.

Some students weren’t as lucky as others, like sophomore Wes Breisch who had to go to his computer architecture lab at 3 p.m. Certain labs are scheduled by the professor and not the university so students still have to show up to class.

The last time the university had a snow day was on Jan. 21. when classes were cancelled after 5 p.m., so this time, students have more time to relax and play in the snow before it gets too dark.

Other students plan on doing anything but homework today.

“I’m probably just going to hang out with my friends and maybe watch ‘Frozen,’ how cute is that! Great movie,” senior Patrick Maybury said.

“You saw that movie? Why?” asked Maybury’s friend.

A few students hope to play outside, like on the Quad, rather than spending their day inside.

There has been multiple snow fights on the Quad this afternoon already.

“Last snow day we made a snowman,” freshman Emma Roache said, but her friend Katie Smith added, “I don’t know if this is the right kind of snow.”

And of course it is great weather to cuddle up and drink some tea, which junior Janlyn Polimeni plans on doing.

“I’ll probably watch ‘The Bachelor’ tonight too,” she said.

Freshman Danny Afonso plans on “making snow angels today” and hopefully will find some friends to have a snowball fight with.