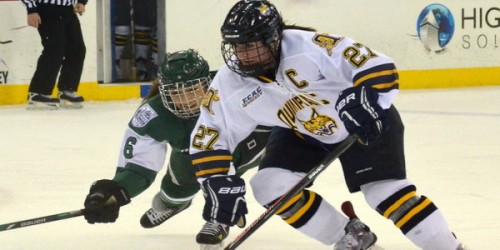 A goal by Morgan Fritz-Ward proved to be the game-winner. Olivia Brackett fired a shot at Dartmouth goalie Lindsay Holdcroft, which deflected off her pads and right to the stick of Fritz-Ward who sealed the deal.

“I saw Brackett breaking for the net,” Fritz-Ward said. “She shot for the rebound and fortunately I was in the right spot at the right time to bang it home.”

Before the eventual game winner, Kelly Babstock added to her points total by crossing the puck across to Emma Woods on the right side, who placed her shot just inside the post, to tie the game with 43 seconds left in the period. It was good for Babstock’s 23rd assist and Woods’ ninth goal on the season.

“I think we felt pretty confident,” Quinnipiac head coach Rick Seeley said on the team’s morale going into the third. “It was great to get it before the third, but it definitely gave us a boost going in.”

The final goal came from Nicole Connery with 2:17 left in the third period, when Meghan Turner found her open on the opposite side.

The only Dartmouth goal came with just over eight minutes left in the second half. Emma Korbs, with the puck at the blue line, fired a slap shot. Laden went low as the puck sailed high right.

“She was just screened on that play,” Seeley said. “So it was imperative after that first one went in that she get a couple shots and I thought she looked real strong after that.”

For the first time this season, Brackett had the alternate captain mark on her, a reward for her leadership and consistent playing time, Seeley pointed out.

“She’s grown up so much as a hockey player and a person,” Seeley said. “She’s played a regular shift almost all year so we thought ‘why not?’ The kid deserves it and she is a great leader for us.”

The win over the Big Green marked Seeley’s 100th career win coaching the Bobcats. He accomplished the feat in five seasons, which he thinks is more of a testament to how well the team has performed

“To tell you the truth I don’t really care about the milestone,” Seeley said. “I’m proud of the players that have been here, but there’s no win a coach has ever had that he did himself.”

Tomorrow the Bobcats take on No. 5 Harvard at 4:00 in the afternoon. They hold the top spot in the conference. Quinnipiac knows it will be a tough matchup, but the emphasis was on defeating Dartmouth.

“For us this was the important game of the weekend,” Seeley said. “Tomorrow is a huge game. If we play like we did tonight anything can happen.”