‘Nothing is more important than…safety and security’

The university is working to enhance the Department of Public Safety officers’ ability to keep the campus community safe by appointing armed officers over the course of the semester. 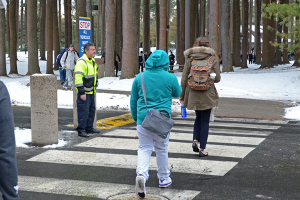 The university will be appointing Senior Public Safety officers that are retired local and state police officers, according to Associate Vice President for Public Relations John Morgan. Not every officer will be armed, Morgan said.

“They are obviously well versed in the use of guns and they know about gun laws,” Morgan said.

“With the right training and the right professional development, the right background checks on the people they’re going to consider arming, with all of that in place, I fully support the university’s approach to this and I actually applaud them for it,” he said.

The Senior Public Safety officers will not have the power to arrest; therefore the Hamden police department will continue to be called in the event of any dangerous situation.

“Take for example, if there was an event on campus that required response by somebody who is armed,” Morgan said. “Having somebody already here on campus, a person who knows the university very well, and can make their way around quite easily, can respond first and quell the situation. Obviously the Hamden Police would be called as well, but if you already have somebody here on the ground who is already able to respond to that, that makes it that much safer.”

Morgan emphasized the role of the Hamden Police Department and ensures they will continue to be heavily involved and maintain close relations.

The Department of Public Safety has been researching other schools’ public safety so they can incorporate new practices to ensure a safer community here at Quinnipiac, according to Morgan.

“After that research it just seemed like the time was right,” Morgan said. “I think that it is important to have a senior Public Safety officer who is armed here on campus when a situation occurs because that person is able to respond quickly.”

“I don’t know that those other departments having police officers makes them safer,” Wydra said. “I can’t say that with any degree of certainty. I do believe that the arming of appropriate personnel at Quinnipiac University should provide them with at least an equal level of protection as the other universities, regardless of whether an individual is sworn or not.”

One parent highlighted the usage of arms by the officers should be properly controlled.

“I think that it’s a good idea as long as they are properly trained,” Kenneth Hiep said.

The Public Safety officers who will carry arms are very used to using them, according to Wydra.

“I have every confidence they will arm their contingent of officers in a way that is most responsible,” he said.

Executive Vice President and Provost of Quinnipiac University Mark Thompson said in a prepared statement this will shorten response times.

“We know that active shooter incidents, they end, at least half of the time, with aggressive action by first responders,” Wydra said. “Campus security can fall in that way of first-responders, so we know seconds matter in those situations.”

Some students had positive reactions to this new announcement; however, other students fear the control the officers will have.

“Any situation where someone’s life is at stake then they can use [guns], but they need to use extreme discretion because you can’t just be waving them around,” freshman Max Magliocchetti said. “Of course there are certain situations that warrant the use, whereas others you can handle it with other means.”

Fifth-year-student and RA Molly Durigan said she is OK with having armed officers as long as they will not be using the arms against students.

“I’m lukewarm about this topic in general,” Durigan said. “If it was to protect other people, innocent people with no guns, then maybe [armed officers are a good idea]. But maybe they should then again wait for the police.”

“I think it’s OK as long as they don’t harm anyone with them; if they don’t get too aggressive,” freshman Katie Hansford Arce said. “At least it ensures that the campus is a little more safe.”

In addition to the officers carrying arms, the Department of Public Safety will be offering training seminars both in town hall style and via Blackboard for students to know what to do if a threatening incident was to occur. The dates of these programs have not yet been scheduled, however, Morgan believes they will be complete by the end of the semester.

“No final decision has been made about making [the training] mandatory,” Morgan said. “However, every member of the university community is strongly encouraged to participate.”

The university encourages students to sign up for university alerts so students can be notified immediately when incidents occur, and can stay updated.

A newsletter was sent home to parents last week explaining the new addition and thus far the responses from parents have been “overwhelmingly positive,” according to Morgan.

“I believe the lives of students are needed to be protected,” said Greg Hansford Arce, whose daughter is a freshman. “First responders cannot always get there, but at least having that possibility here I believe it’s in the best interest of the faculty, the students, visitors. Somebody might get stressed out enough to go off the deep end.”