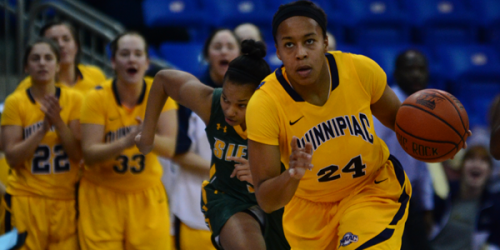 “Sammy gave us a huge lift and we got a comfortable lead with her knocking down shots,” Quinnipiac head coach Tricia Fabbri said.

“I was fighting in the first half and the beginning of the second half,” Guastella said. “As a shooter you just have to have short-term memory and forget about it and just keep stroking. It feels good because I haven’t been as confident as I should be and this will help the momentum of my shooting and the team. ”

Her teammate Brittany McQuain also came away with 13 points, seven rebounds, and three blocks. Her scoring output moved her to 17th place on the all-time scoring list, passing Queenie Edwards. She now was 1,212 points for her career.

At halftime the Bobcats had a 28-24 lead, playing solid defense and forcing fouls, but not seeing many shots fall. They shot 11 for 29 and their opponent shot 9 for 26.

The second half showcased a completely different Bobcats team offensively. They put up 42 points and shot nearly 43 percent from the field. They also shot 37 percent from downtown and went 12-of-15 from the free throw line.

The defense stayed consistent, holding Siena to 31 percent from the field for the entire game, a number that Fabbri was proud of.

“We’ve been able to hold these past two opponents to 31 percent field goal percent shooting, which is just phenomenal,” Fabbri said.

Quinnipiac was prepared for the Saints, despite this being their first ever meeting. It frequently had a jump on inbound plays and contained the amount of scoring opportunities.

“I thought our whole team did a good job,” Fabbri said of the defensive effort. “We talked about hands high, a lot of talk, and communication. We were really aggressive. We knew what was coming. We knew personnel. We knew the scout. We took plays away.”

“They’re a tough team and they’ve been in some really close games,” Guastella said. “They’re fighting for wins and they really want it. When you’re down there you just have to play smart and not use your hands and let them get in your head.”

Quinnipiac’s next game is Tuesday at Rider, when it hopes to continue its defensive success.