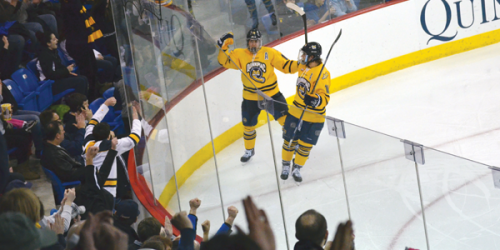 Through the first 20 minutes of play on Friday night against Merrimack, the Quinnipiac men’s ice hockey team had only recorded four shots on net. The Bobcats allowed Merrimack to benefit from sloppy play in their own defensive zone and consequently trailed 1-0.

Then the second period began, and the Bobcats flipped a figurative switch.

Quinnipiac went on a four-goal frenzy in the period’s first five minutes and was able to overcome its early woes to go on an and beat Merrimack 6-1 at the High Point Solutions Arena.

“We just didn’t play well in the first,” Quinnipiac head coach Rand Pecknold said. “Our emotion level wasn’t high, our passion level wasn’t there. We sat a couple kids, and the kids that played responded.”

The win marks Quinnipiac’s fifth-straight at home. It is now 11-1-2 at the TD Bank Sports Center this season.

“For us it’s just been getting traffic to the net, you’ve got to shoot the puck,” Bryce Van Brabant said. “From there we’ve just gotten some nice bounces.”

Merrimack’s Mike Collins started the scoring, as he found the back of the net 4:45 into the first period. The senior found the puck in a scrum out in front of the net and put it under the pads of Quinnipiac goalie Michael Garteig to give the Warriors a 1-0 lead.

Jordan Samuels Thomas tied the game exactly one minute into the second period, blasting a wrist shot past the left leg of Merrimack goalie Rasmus Tirronen.

Bryce Van Brabant then lit the lamp 55 seconds later on a one-timer from Matthew Peca. The Bobcats had erased the deficit and taken the lead in less than two minutes.

“We put that makeshift line of Peca with Bryce and Jordan, and it was great,” Pecknold said. “They had two goals, and it gave us a lot of energy and we got rolling.”

Kellen Jones was next, as he netted his 14th goal of the year. Jones benefited from a Merrimack giveaway out in front of the net, as he stole the puck then skated to the left side of the net and put it past Tirronen.

Connor Jones rounded out the scoring spurt, finding the back of the net at 4:56 to extend Quinnipiac’s lead to 4-1.

“Last year we were good in the first period, this year not so much,” Pecknold said. “I don’t know exactly what it is, but there’s no question we have been good in the second.”

The four second-period goals for the Bobcats is the most they have scored in any single frame this season.

Bryce Van Brabant then added a goal in the third period at 13:27. Van Brabant deflected a Travis St. Denis shot into the net for his second goal of the night.

“It’s nice to have some personal success, but I’m just happy with the win today,” Van Brabant said. “We kind of started off slow, but it was nice to get going in the second period.”

Brayden Sherbinin was the last to get in on the action, as he scored with 2:15 left in the third to extend the lead to 6-1.