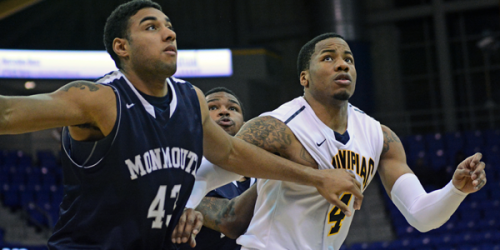 College basketball is often a game of runs. Thursday night’s Monmouth/Quinnipiac matchup at the TD Bank Sports Center was no different.

In the first half, that is.

The second half was the Ousmane Drame show, as the junior led the Bobcats to a 70-61 victory and helped Quinnipiac improve to 10-6 on the year.

Quinnipiac outrebounded its conference foe 48-34. They have now out-rebounded their opponent in 48 straight games, an NCAA Division I record. The Bobcats benefited from 23 second-chance points, while Monmouth only had seven.

Drame had 15 points, a career-high 21 rebounds, and a career-high seven blocks on the night. He had nine points, 17 rebounds and three blocks in the second half.

“I had two great practices leading into today,” Drame said. “I was able to stay healthy in practice. I was very energetic and ready for this game.”

Drame’s seven blocks were not only a personal best, but a Quinnipiac program record.

“When Ike got into foul trouble I knew I had to pick it up a little on defense. I felt responsible for that, being the only big man out there,” Drame said.

Azotam finished with four fouls, but did manage to score 10 points and collect five rebounds. He picked up two fouls early, and was forced to play only 24 minutes on the night.

Monmouth used a 17-0 run in the middle of the first half to take a commanding 27-16 lead. Quinnipiac, however, would respond nicely, and end the half on an 11-2 run. The Bobcats trailed 31-29 at halftime.

“That run was huge,” Moore said. “I thought continuing to do what Quinnipiac does, at that point, when not a lot was going for us, that’s a sign of a veteran team.”

Quinnipiac shot 54.2 percent from the floor in the second half, while knocking down four second-half three’s to help seal the deal.

“I think the turning point was that we started to get stops. We got stops, and stayed together,” Drame said.

The Bobcats had four players in total that reached double-figure points, including Drame, Azotam, Umar Shannon and Zaid Hearst.

Both Hearst and Shannon sunk 3-pointer in the game’s final five minutes to help Quinnipiac get back on track.

Deon Jones had 16 points and 11 rebounds for Monmouth.