The Student Veteran’s Organization hosted its first “A Cup of G.I. Joe” event, dedicated to supporting deployed veterans, in front of the Carl Hansen Student Center on Monday, Nov.11. 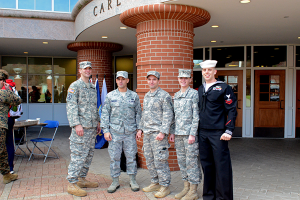 The SVO, along with the Ice Cats and Quinnipiac’s cheerleading team, invited students to sign cards and donate funds in efforts to support veterans stationed overseas.

“It’s a non-profit event and its mission is to support the QU student veterans, the veterans overseas and other universities as well,” Ice Cat member Taylor Chelo said. “[Students] sign cards for troops who are looking for love overseas and for those who are homesick and have nostalgia. It really helps them a lot.”

The event was also created to raise awareness about the veterans here on campus. The Ice Cats and cheerleading team became involved by the invitation of freshman Emilio Dominguez, SVO treasurer and cyber transport systems technician at the U.S. Air Force, Chelo said.

“We wanted to raise notoriety of the veteran’s organization on campus and raise awareness,” Dominguez said. “There are a lot of troops still serving and a lot of guys still overseas; we can’t forget about them.”

Among supporting students, Veterans of the Navy, Air Force and other military branches, came out to invite passing students, along with the help of the Director of Veteran and Military Affairs Jason B. Burke.

Dominguez explains the veterans’ community as a very tight one, making raising awareness “outside the bubble” important, something Army veteran sociology professor Donald Sawyer agrees with.

At least 100 people signed cards and about 45 volunteers circulated throughout the morning, according to Chelo.

“This is the first time this [has been] held, but it is so successful this year that I think we will have to continue this for years to come,” Chelo said.

While they didn’t have a set amount in mind to raise, the event raised about $800 to support services for those stationed overseas, Chelo said.

“You know we are fortunate enough, we’re back here, we’re happy, we’re healthy and we’re in school at a beautiful college with beautiful people and everyone is happy here,” Dominguez said. “But there’s still guys over there waking up in the dirt, getting shot at and we can’t forget about them. That’s the whole purpose and it’s really the point behind this whole thing.”

Sawyer hopes these events will remind people of the sacrifices made by those defending the country.

“Something that is a reality for our men and women overseas and deployed is that [they are] protecting the constitution of the United States, but  [they’re] also protecting it with [their] own lives,” he said. “That’s an amazing sacrifice that people are willing to give in service to the country.”