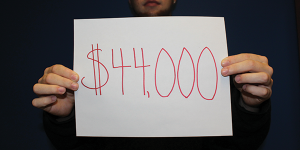 The average member of the class of 2013 graduated with an average of $35,000 of debt, according to a survey of 750 college graduates conducted by Fidelity Investments.

Approximately 62 percent of Quinnipiac students will face student loan debt upon graduation, which is slightly higher than the national average of 60 percent, according to American Student Assistance. Yoia said the number of students with federal and private loans has risen over the years due to the increase in undergraduate admissions.

“There’s more students, so there’s more loans out there,” Yoia said. “The dollars in loans have also been increasing over the years as tuition goes up.”

According to Yoia, undergraduate students are required to complete entrance and exit interviews upon their arrivals and graduations, respectively. Although these interviews include discussion about loans and financial aid, Yoia said the university will implement a financial literacy program next year.

“We’re bringing out a product called SALT, which is through a company called American Student Assistance,” Yoia said. “We’re going to be rolling that product out effective for the ‘14-‘15 school year, and it’s going to give students an opportunity to get loan counseling throughout their four years here.”

Yoia described SALT as a “terrific” product, and said the ultimate goal for this program is to teach students responsibility about borrowing money.

Senior Heather Scott said she has not really learned anything from the university thus far about how to pay off student loans after graduation.

“I’ve heard that we’re required to do an exit interview as seniors, so I guess we’ll learn about it then,” Scott said. “But so far, I don’t really know anything; I just really know my loan provider.”

Sophomore Connor LaChapelle said he feels he has already learned the responsibility behind borrowing money from his father.

“He taught me a lot about working in general, and to always pay with cash and to never spend money you don’t have,” LaChapelle said. “He taught me to understand that taking out money is your promise, and that not paying it back isn’t an option.”

Sophomore Kori MacDonald, like Scott, said she has not learned much about student loan debt and how to handle it responsibly, and she would be in favor of a program like SALT.

“I probably would [go to that program] if it were an hour-long presentation on the basics, especially if it was offered during orientation,” MacDonald said.

Although LaChapelle said his family has taught him the importance of responsibility when borrowing, he said he thinks a financial literacy program through loan providers would be helpful to students.

“I don’t know if it should be a service provided by Quinnipiac,” LaChapelle said. “I think it would be more ethical to be offered by institutions like Discover, who my loan is with.”

LaChapelle said he was able to decrease the amount of loans he took out upon becoming a resident assistant, but he still anticipates a fair amount of debt.

“I’m going to guess that I’ll have to pay around $600 a month for at least 10 years,” LaChapelle said. “I financially support myself, so I need to take out loans even with the RA job.”

Scott said she has found that the dollar amount of loans she has taken out over her four years has increased, but not exponentially.

“Every year, I find myself adding up the numbers and it is more and more,” Scott said. “But with support from my dad and my uncle, and hopefully if I get a job pretty soon off the bat, then all three of us will help make the payments and send in a little more than the required amount to speed up the payment process.”

MacDonald said that she plans on working hard now to pay off her loans in the future.

“I have a job at home and I’m planning on getting an off-campus job next semester,” MacDonald said. “I’m conscious of the money I spend here and at home, knowing that I should not only be saving for myself now, but also for the loan payments that will come later.”

Scott said she is nervous about paying off her student loans in the future.

“It is what it is,” Scott said. “But I definitely think it is worth it.”