Mary Beth Tinker was 13 years old when she made history in the 1969 Supreme Court case Tinker v. Des Moines, and when the idea of young people knowing their rights to “Speak up and stand up for your right,” Tinker said. 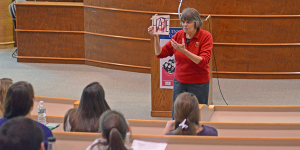 Tinker spoke to students, faculty and staff on Nov. 12 in the Grand Courtroom of the Law School about the result of the case, that helped protect the First Amendment rights for teachers and students in public schools.

Tinker came to the university as part of the nationwide “Tinker Tour” with student media attorney Mike Hiestand, according to a press release from Associate Vice President for Public Relations John Morgan.

Tinker believes everyone in the United States needs to understand children’s rights, especially children themselves.

Tinker discussed how across the country there are various students who stood up for a cause and were successful. She mentioned a group of students in Alabama who were successful in removing an unhealthy chemical from Gatorade.

Throughout her speech, Tinker touched upon her own experiences in the Tinker v. Des Moines case.

Tinker explained she and a couple of other students, one being her older brother John, wore black armbands to school in 1965 to mourn the loss of soldiers who died during the Vietnam War.

Schools in the District of Des Moines decided that these armbands were not allowed to be worn in school, and Tinker was suspended.

In February 1969, the supreme court ruled Tinker had the right to wear the armband in school and she and the other students were wrongfully punished.

Tinker said this was not only a great victory for her, but for students across the country.

According to Tinker, she had no idea the impact her case would have on other students.

“I had no idea that this case was going to be so significant and it took me years to realize it,” Tinker said. “I didn’t realize it was this landmark case, and now 6,000 rulings have mentioned the Tinker case.”

“It is an amazing opportunity to listen to her and I am very fortunate to have her come to [Quinnipiac],” Novak said.

Freshman broadcast journalism major Andrew Badillo said he was empowered by Tinker’s decision to wear the armband to school.

“I thought it was remarkable how such a small school in Iowa could make an impact and get their appeal to the Supreme Court and actually win,” Badillo said.

Badillo said he enjoyed listening to Tinker’s speech and that her tour will make a difference in the United States.

“I feel that the Tinker Tour is great in that she is trying to get students all across the country to stand up for what they believe in, no matter how big or small,” Badillo said.

Tinker encouraged students in the audience to stand up for their rights and make a difference.

“Don’t do what’s popular, do what you want to do,” Tinker said.