When Hurricane Sandy hit the east coast this time last year, Quinnipiac University was closed for a week. When all was said and done, the school was left to deal with power outages on the Mount Carmel Campus and tree damage in the Pine Grove, according to facilities. All repairs at the university are complete, but many cities on the east coast are still recovering from the storm. 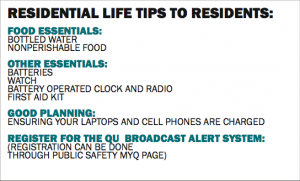 While some students stayed at Quinnipiac during the storm, other students went home.

Sophomore Christina Sullivan from Broad Channel, N.Y., went home the day after the storm, where the town is still dealing with the effects of Hurricane Sandy, she said. Located near Rockaway, Broad Channel was one of the areas hardest hit by the storm.

“Almost everyone I know is constantly in contact with FEMA trying to get the insurance money that they deserve, but are having a horrible time receiving,” Sullivan said.

With almost all stores reopened, construction on one of the main restaurants, The Bayview, has not begun because its owner cannot get insurance money, according to Sullivan.

“The stores have almost all reopened and most of the houses are almost fully rebuilt, but the hurricane changed how my town looks and how my neighbors go about their daily lives,” Sullivan said.

Many boats were ruined due to the storm, which prevented citizens from annual sailing trips this summer, according to Sullivan. In addition, many homes are still considered unsafe to reside in.

Most businesses and houses in her hometown were rebuilt and re-bought equipment.

“It was a slow recovery,” Grills said. “Although, many houses were not livable during the summer until near the end and many businesses opened late.”

Sophomore Robert M. Klemens from Rye, N.Y., went home for the storm. The town has pretty much been fully restored, minus a few exceptions such as an amusement park Playland, which sits on the coast of Long Island sound, and an indoor skating rink, he said. After some Rye Playland rides floated away in the Long Island Sound, it was reopened in May, but still faces renovations and legal battles to bring it back to 100 percent.

“Within the park is an old indoor skating rink that the NY Rangers use to practice at; this arena is still being reconstructed and has caused local high school teams to find new rinks to play at,” Klemens said. “But in terms of the overall image of Rye, it has pretty much fully recovered and businesses are back up and running.”

Here at Quinnipiac the damage is no longer seen, but it is clearly still felt. A large population of students hail from regions that suffered greatly, but the university is prepared for the possibility of another natural disaster.