Rocking the night away 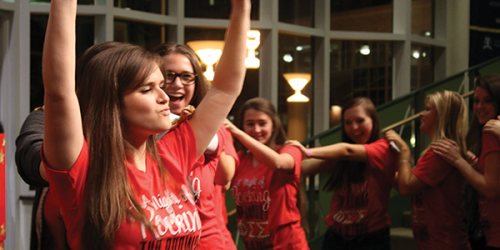 Phi Sigma Sigma’s 22nd annual Rock-a-Thon event was its last due to the sorority’s recent philanthropy change. Instead of focusing on kidney cancer research, the sorority now focuses on “school and college readiness” and support the “Learn Today, Lead Tomorrow” fund because of the recent cure for kidney cancer. 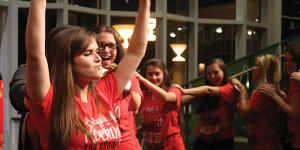 The sisters of Phi Sigma Sigma sat in rocking chairs for 24 hours this weekend on the Carl Hansen Student Center patio and piazza to raise money and awareness for the National Kidney Foundation.

Phi Sigma Sigma philanthropy chair Audra Kalinowski explained when the sorority was founded in 1913, kidney disease was the number one killer of women in America.

“That’s why we started Rock-Thon,” Kalinowski said. “We would rock in chairs in honor of patients [undergoing dialysis treatment].”

However, since a cure for kidney cancer has been found, the National Kidney Foundation no longer needs as many donations, according to Kalinowski.

“We’re actually coming up with a new big event to kind of replace Rock-a-Thon, but it’ll always be special in our hearts,” she said. “We’re in the process of planning [the new event]; it’ll be similar to [Rock-a-Thon]. It’ll be very big and involve our new philanthropy ‘Learn Today, Lead Tomorrow.’”

The Learn Today, Lead Tomorrow fund supports underprivileged students who need educational tools and supplies to complete their studies and get prepared for college.

“We’re so grateful for everyone and their donations,” Kalinowski said. “[Having] our sisters be here for 24 hours and do all these events; it’s dedication. It’s not easy. We’ve looked forward to it every year and it’s a really big accomplishment for us.”

Rock-a-Thon started on Oct. 25 at 2 p.m. The event is currently the only 24-hour fundraiser on campus.

Activities at this year’s Rock-a-Thon included karaoke, Zumba, a fashion show, a movie, raffles and a midnight dance party. 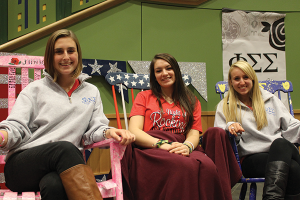 Senior Phi Sigma Sigma member Amy Fourounjian said the event was “much better” than last year because of its change of location from Burt Kahn Court.

The change in location was due to a lunch held in the recreation center during Parents’ Weekend, according to Phi Sigma Sigma’s co-chair Tracey Hummel

“It was different but it actually worked out a lot better,” said Hummel, who started planning Rock-a-Thon last November.