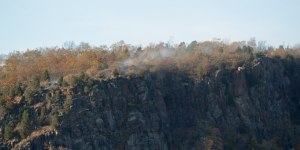 A brush fire broke out around 2 p.m. on the top of Sleeping Giant State Park, according to the Hamden Fire Department. The fire, which spread to five or six acres on the “chin” of the Giant, is being contained by approximately 40 firefighters from towns across New Haven county. The cause of the fire is yet to be determined.

The fire at Sleeping Giant State Park is in the process of being contained, but has yet to be declared under control, park officials said.

As of 5 p.m, approximately 40 firefighters with water packs on their backs or on brush-trucks went to contain the fire. The fire is not accessible by trucks, and therefore regular hoses cannot be utilized.

Hamden police are currently directing traffic outside the park’s entrance on Mount Carmel Avenue, according to Park Supervisor Joe Maler.

The fire was mostly near the Blue Trail, which leads to the head of the mountain where hikers may overlook the Mount Carmel campus, according to Maler.

“It’s very windy today and that could make the fire spread very quickly,” Maler said. “It will hopefully be out in the next hour or so if everything goes well.”

Sophomore Michelle Wendt was hiking the trail leading to the castle when her and her family encountered a large amount of smoke. Her father, Ken Wendt, said he was worried about the strong winds.

“The winds are probably up to 30 miles per hour today,” Ken Wendt said. “No one kicked us off the trail, but they’re not letting anyone else up.”

Lieutenant Sam Muzio of the North Haven Fire Department said community emergency response teams from Bethany, North Haven, Hamden, Wallingford and Cheshire responded to the fire within the first hour and more towns were on the way.

In order to extinguish the fire, Maler said firefighters had to get ahead of the fire even though it was a dangerous approach.

“They have to pick their battles, but the reality is it’s not over until it’s over,” Maler said.

Hamden Fire Chief David Berardesca does not expect the workers to be there overnight due to high risk factors, but the the perimeter will be maintained, and the area will be reevaluated by the Department of Energy and Environmental Protection and the Hamden Fire Department  in the morning in case more help is needed.

Berardesca expects flare-ups of the fire over night, but believes that the cold night and probability of frost will help eliminate these risks.

Berardesca stressed that this process is extremely labor intensive, and the Hamden Fire Department could not have handled it on their own.

As of 5 p.m. a few of the firefighters were returning to the base of the mountain.

The park is closed to the public until further notice.

“Until the last bit of ashes are put out, we can’t say for sure that it is completely contained,” Maler said.

Stay with The Chronicle for more updates.