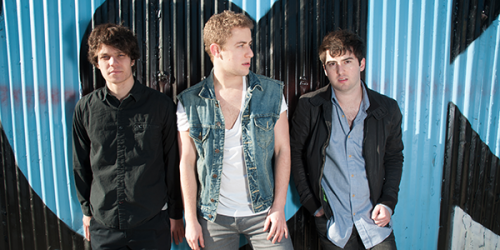 Members of Quinnipiac’s 2013 graduating class have gone off into the world, finding jobs in their various fields, and leaving QU to a new generation. While former Bobcats are now nurses, journalists, law-students and teachers, and one in particular will soon be bringing his career as a full-time musician back here to Hamden.

Ian Reibeisen, lead singer of the pop-rock band Crash the Party, made a name for himself here as a member of Voted Most Random, which he says acted as a stepping stone in his musical career. These days he is following numerous tours for bands like We the Kings and The Maine, while promoting CTP’s first EP “Come Alive,” which features songs titled “No Exit” and “Call You Mine,” among others.

Along with bandmates Chris Swane and Crick Butcher, Reibeisen and the band are preparing to launch a brief tour before taking some time off to record their next EP. The tour is called Wintour is Coming, a play off of the popular book and television series “Game of Thrones.” The tour includes stops in New York City, New Jersey, Boston and at The Space in Hamden on Saturday, Nov. 2.

The Space will be opening its doors at 7p.m., but tickets can be purchased ahead of time at the link on Crash the Party’s website: http://www.ctptheband.bigcartel.com.

“We’re going to be playing the stuff from ‘Come Alive.’ I want to play some of the new stuff because I think it’s great – I know it’s great – but we’re doing it right and waiting until it’s recorded,” Reibeisen said. “Things are going to change, the music will grow and then we’ll come back here with it.”

Crash the Party should be a crowd pleaser for Quinnipiac, as Reibeisen says many of the songs they have written and performed were inspired by the ladies on campus. Even the songs that aren’t about people on campus are meant to be relatable and catchy.

Though the band works to infuse its original songs with humor, when it comes to the music and performance, the trio is all business.  Reibeisen spoke at length about his dedication not only to making Crash the Party’s music the best it could possibly be, but also about forming relationships throughout the greater community that feel more like family than fandom.

“Our main philosophy: We know our music is good and we’re going to keep making better and better music because that’s what we love doing most,” Reibeisen said. “But what’s right up there with that is making sure that everyone we meet and everyone that supports us is a part of our family and friends.”

As a former marketing major and a member of Delta Tau Delta fraternity, Reibeisen is known here on campus, but in a community that grows green gills every Saturday night – and yes, that is a Toad’s reference – it may be difficult to get a big group of students to journey down to The Space for a live show.

“I know we’re good,” Reibeisen said. “But I think the hardest thing for college students is stepping out and doing something that the whole group isn’t doing.”

Aside from the primary concern of drawing a Saturday night crowd, the show also happens to be on the second weekend of Halloween, when many students will be enjoying the festivities of costumes and craziness. Don’t let that Halloween routine keep you away though. Just bring your spirit with you to the show.

“I wear costumes most days of the year just for fun,” Reibesen said. “People are more than welcome to wear costumes, to be honest I probably will be.”

Click here for a special offer from Crash the Party.