Pi Beta Phi hosted its second-annual Angels in the Endzone flag football event in effort to raise money for literacy awareness on the Quad Sunday. 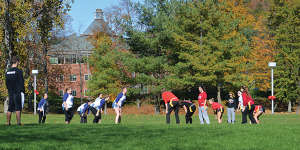 “It looks like we made the same amount as last year which is very good, so yes we consider it very successful,” Chapter President Nicole Cherenzia said. “And to think about it, we did all of this in one day.”

Pi Beta Phi recognizes the necessity behind knowing how to read.

“Everyone needs to know how to read if [he or she] wants to be successful in life,” Sandoli said. “It sounds like such a simple concept but some people don’t have that. Not everyone is able to have the same education as we do.”

The sorority had a total of 30 registered teams. Members of fraternities on campus, such as Sigma Phi Epsilon, helped support the cause by assembling various teams. The flag football event was conducted on an elimination per round basis. Those who won a round would progress forward to following rounds until a winner was declared.

The final winner received a $100 gift card to Buffalo Wild Wings and the second place finisher received a $50 gift certificate to TGI Fridays.

Each participant within these teams was required to pay a $5 fee to support the cause.

“It’s fun, everyone gets together and it’s just a good event in general,” sophomore Stephanie Thomas said. “Any philanthropy event is a good thing to go to.”

“A lot of people were here, so I think [many] people came to support us,” Sandoli said. “It was awesome.”