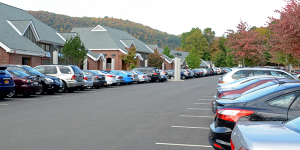 [/media-credit]Public Safety assures that such violations will not go without repercussions.

Hilltop has 613 parking spaces available at the beginning of each semester while Westwoods consists of 360 spaces, Barger revealed.

The Hilltop parking lot is on the Mount Carmel campus and the Westwoods lot is by the Polling Institute across Whitney Avenue. Sophomore Brooke Artz said it is more convenient to part at Hilltop.

“It’s more time consuming waiting for a shuttle to take you to Westwoods [when] Hilltop is right there,” Artz said.

Sophomore health science major Erica Magalhaes received a $40 parking ticket for parking on Hilltop instead of Westwoods after leaving a meeting later than she anticipated.

“I was a little scared of going [to Westwoods] and waiting for the shuttle that late at night, alone, so I left my car at Hilltop for the night thinking that there would be no problem,” Magalhaes said. “I just don’t think you should have to pay a ticket for parking in the wrong lot for a night or two.”

Yet, parking is a privilege, not a right, Barger said.

“Parking has been and will continue to be an issue as long as drivers feel that parking is a right,” Barger said. “Parking is a privilege whether or not parking is limited, abundant or free. The university has ample parking; the unfortunate part is that the numbers of parking spaces that are convenient are much smaller in number.”

At the beginning of this semester, Quinnipiac introduced a new barcode system designed to make the process of checking for parking violations more accessible.

There is also a system used to assign students to specific lots, Barger said. The student parking lot assignments are determined by the number of years attended, credits and residence location for each student.