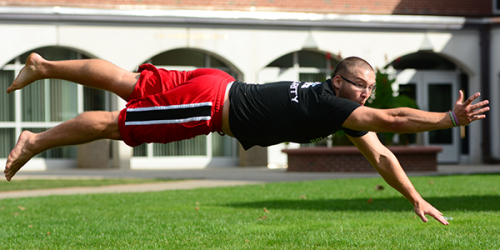 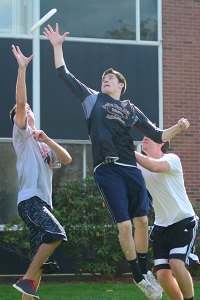 Students were soaring above the ground, their bodies extended to catch discs as they spiraled across a field. All of this effort came from members of the community looking to help raise awareness for domestic violence.

The event has been a huge success for Alpha Chi Omega in the past, as can be seen by the past two years’ combined earnings of $66,845.

This past Saturday, the Quad was filled with signs that displayed statistics about domestic violence. These informative signs joined purple ribbons to emphasize to students the severity of the issue.

The event offered many additional activities to keep spectators entertained. Rita’s Ices, a dunk tank, a photo booth and a DJ were all popular attractions. There were also raffles that students entered to win items such as gift cards to local Hamden businesses, tickets to see the New York Yankees and New York Mets and an iPad.

Students also had the opportunity to “pie an Alpha Chi,” an activity where students could pay to throw a whipped cream pie in the face of an Alpha Chi Omega sister. Various fraternity members barbequed food that Chartwells had donated for the event.

All of the money raised was donated to the center for Domestic Violence Services of Greater New Haven. The center provides shelter for women in abusive relationships.

“It feels rewarding that we are an organization of women helping other women,” said Helen Henglein, a sophomore Alpha Chi Omega sister and a member of the philanthropy committee. “I talked to a woman yesterday who had benefited from the services at the New Haven shelter. The help that we were able to provide really changed her life. It’s great to know that the money we raised was directly given to the shelter and betters the lives of local women.”

The biggest event of the day was the frisbee competition. Twenty teams comprised of seven members each began the competition and the 10 winning teams moved on to the next round. The games continued until an ultimate champion emerged. The winning team was named Tammy’s Team and received a gold-painted frisbee in honor of their victory.

“Frisbee Fest was phenomenal. So many frisbees. So many pies. So much fun,” said junior Mike Morrone, who also participated in the Frisbee Fest competition.

The satisfaction of Morrone mirrored students’ attitudes throughout the day. People could be seen running across the grass, sitting down in the shade and enjoying Rita’s Ices or laughing as they threw a pie in their friends’ faces.

“It was such a beautiful day out,” sophomore Emily Ampel said. “I sat with my friends for hours just watching the frisbee competition and enjoying the barbeque food and Italian Ices. It was so much fun, and I’m so glad I got to give back to the community in the process.”