Zeta Beta Tau gets on the ball

Zeta Beta Tau is hosting its first Get on the Ball event this week to raise money for the Children’s Miracle Network, an organization that supports children who are terminally ill. 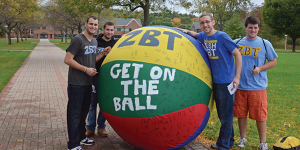 The fraternity members will be on the Quad asking students and faculty to sign a giant inflatable ball. For every signature on the ball, local businesses will donate about 70 cents, according to Zeta Beta Tau President Michael Fishman.

While business donations came from local barbershops, pizza shops and restaurants, students and faculty are able to donate money as well.

“It’s a great way to get money,” said Chris Henry, a sophomore member of Zeta Beta Tau. “It’s just so easy for someone to sign the ball, and the donations we are getting just keep adding up.”

The event was developed by the chapter located at the University of Maryland, and is currently a national philanthropy event done by each chapter of Zeta Beta Tau.

Junior Michael Levy, the Philanthropic Chair, is excited for the future of Get on the Ball.

“The fact that we are able to get this done here at Quinnipiac for the first time is great,” Levy said.

Levy believes that the event is a simple and productive way of raising money for a good cause.

“This event is asking the least amount from the community but it also has the biggest impact,” Levy said. “The community can get so involved in it by just signing their names. It helps out tremendously.”

The Quinnipiac chapter of Zeta Beta Tau has only been around since the spring of 2012, and this is the largest event the fraternity has put on so far.

“This is huge for our fraternity,” Levy stated. “It’s our first big event. We are very new on campus, we are about two and a half years old, and are not fully chartered yet.”

Fishman was surprised at how much planning the event took, but is happy with the outcome.

“It took more planning than we originally expected,” Fishman said. “But when we went around to local businesses, they were very helpful in reaching the goals we had set financially.”

Levy mentioned that there are plans for Zeta Beta Tau to do other various philanthropic events in the near future, trying to reach out and support members of the Quinnipiac Community. The fraternity will be working on creating events that raise money for autism, diabetes, and breast cancer.

Members of Zeta Beta Tau are also happy with the success of the event.

“I think personally it’s a great event,” sophomore member of Zeta Beta Tau Chris Mulé said. “All you do is roll a ball around and all you have to do is sign it and businesses pledge money and it’s a great way to raise money for the Children’s Miracle Network.”

Fishman has a positive outlook on the event, and plans to work hard to achieve the goal set by the chapter.

“We hope to continue to get great support from the QU Community,” Fishman said. “We also want to thank everyone who has come out and signed it already.”

For anyone who wants to sign the ball or make a donation, Zeta Beta Tau will be on the Quad Monday through Friday from 11 a.m. to 5 p.m.