This is me: Embracing America

This is Me: Sara Olyaei 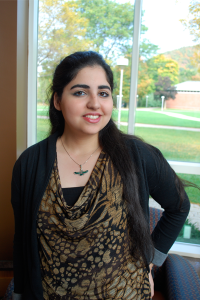 Choices A, B, C or D. Over and over her eyes wandered the pages of her first multiple-choice exam. Sara Olyaei tried to think back to what her professor was saying one week before in his fast paced English dialogue, but she hadn’t been able to keep up with his words.

Beginning as a freshman in September 2012, Olyaei experienced a hearty dose of culture-shock. Although she was fluent in the language, she never had to listen to someone who spoke English so quickly nor did she ever take an exam with only multiple-choice questions.

Olyaei came to Quinnipiac from the Middle East, where she grew up in the city of Dubai in the United Arab Emirates. She comes from a Lebanese mother and Persian father, is a trilingual student and speaks Persian, Arabic and English. Olyaei also travels frequently within the Middle East, exploring numerous cultures.

There are approximately 33,800 students from the Middle East enrolled in American four-year colleges and graduate programs, according to the Open Doors Report on International Educational Exchange.

“To Middle Easterners, college is our only shot at education. Knowing how hard our parents worked to get somewhere is our motivation to do well in college,” said Sam Olyaei, Sara Olyaei’s older brother.

Connecticut, despite its relatively small size, was an easy choice for Olyaei because Sam was a student at Fairfield University and later received his master’s degree in Business Administration from Quinnipiac in the spring of 2013. Having her brother at Quinnipiac last year helped Olyaei’s homesickness.

In Dubai, Olyaei never had to be on her own nor make her own decisions.

“In our culture, it’s tough for a girl to find her own way as she is raised and babied by her family until she essentially gets married,” Sam said.

Olyaei said she was nervous when she arrived at Quinnipiac. It was the first time she had ever left the country without her family by her side and was not sure if people were going to accept her. She thought: what would her roommates think of her? Would they know where she came from? Would they too want to learn about her culture and way of life?

Fortunately for Olyaei, her roommates became her closest companions and helped her adapt to the American way of life by helping her practice her American accent and providing encouragement on a daily basis.

“Her transition to the United States has been made easier because of the fact that she has such close roommates and friends,” Sam said.

Coming from Dubai, which has avoided most conflicts but is still closely related to many struggling nations, Olyaei’s experience with these issues is inevitable, yet she has chosen to focus on her transition to American culture rather than the stigma behind her nationality.

As she speaks of her country, her eyes light up and an ambiance of comfort takes over her body.

“The Middle East is really beautiful,” Olyaei said. “I would encourage everyone to visit the Middle East because it is not nearly as bad as you think.”

However, Olyaei did express concern over the turmoil in the Middle East.

“I’m just scared because I don’t want to go back to the Middle East and find it to be not what I remembered,” Olyaei said.

Despite all of the politics, Olyaei is eager to encourage others to learn about her background. She wants others to know and appreciate the beauty of where she comes from. Many people are under the notion that it is unsafe for Americans, but she says she would not be studying here in America if that were the case.

Discovering the life of others is what Olyaei enjoys the most. She is open to learning a variety of cultures and enjoys sharing with others the ones she practices. In Dubai, her neighborhood is very multicultural, most likely part of the reason for her interest.

“Coming in freshman year, I didn’t know what to expect living with an international student,” said Kathleen Mulligan, one of Olyaei’s roommates. “I thought we would be so different and find it difficult to find a common group, but I was completely wrong.”

Mulligan said living with Olyaei has given her a different perspective on life. Olyaei and Mulligan have lived together since freshman year along with Jamie Taratko.

“Living with Sara has taught me the similarities and differences that we both face being a part of different cultures,” Taratko said. “I have been able to learn more about her life in Dubai and Sara has been able to adapt to how we live our lives in America.”

Last year Olyaei says she experienced “the best time of her life” when traveling to New Jersey to celebrate Thanksgiving with her roommate. Olyaei for the first time not only experienced a Thanksgiving dinner, but what life was at home in New Jersey for a typical American family.

“My parents, brother and grandma were very interested in her culture and we sat at our dinner table for hours every night talking about it and asking her questions,” Mulligan said as she recalled the week.

Mulligan’s family was warm and welcoming, Olyaei said, and she took part in prayer with them prior to eating. She also learned a few American sports games.

Olyaei enjoyed this experience because not only was she learning about Thanksgiving and what it was supposed to mean, she felt it.

Like Mulligan, Taratko and many other students, Olyaei loves the beauty of the campus and the way that the community makes her feel.

“I get the feeling that I think I belong here,” Olyaei said as she talked about her decision to attend Quinnipiac.

Olyaei’s religion also sets her apart in the QU community, because she is among the relatively small group of students who practice Islam. She prays five times a day and celebrates a special fasting period called Ramadan. During Ramadan, which translates to “family gathering,” Olyaei spends a great deal of time celebrating with her family and community. In addition, she fasts from sunrise to sunset where she listens to prayer outside the Mosque before she can feast. This time is very important for Olyaei and although it changes months and times each year, she was lucky enough to celebrate it in August with her family prior to coming back to the United States.

Despite her Islamic religion, Olyaei is open to all religions and practices. She continues to practice her religion while she is at Quinnipiac, but she welcomes new experiences as she learns about the Christian and Jewish faiths here at Quinnipiac. Olyaei wants to learn about other faiths while teaching her own.

“Be you,” Olyaei says is her most common phrase. “If you are not yourself, then what is the use of being yourself?”

Olyaei says that people are most likely to accept you if you just be who you are. Just as Mulligans family did and all of her friends here at Quinnipiac have.

“After coming here, I feel like I am now an independent person and can take care of myself. I am finding the true me,” Olyaei said.

Olyaei feels that she has learned a great deal about the American culture and way of life while studying at Quinnipiac. She hopes to study abroad to see an even different culture than she already knows. Everywhere she travels and everyone that she meets, she attempts to teach about her culture; a culture that many people do not understand, she said.

As Olyaei looks back on her first year with bright smiles she knows that this has been one of the most amazing experiences of her life and she is anxious for the years to come. She hopes to graduate with a degree in biomedical science, and either receive a master’s degree or go to school for pharmacy, but whatever she does she will always be her true self.

“I am truly finding myself over here,” Olyaei said, “through studies, through challenges, through knowledge, through friends and professors, through everything.”