As Greek life on campus is in full-bloom, Gregory Fink, assistant director for student center and campus life for Greek life, prepares to move on from his Quinnipiac career. On Oct. 10, Fink will say goodbye to Quinnipiac’s fraternities and sororities, and hello to Class Councils at Texas A&M University. 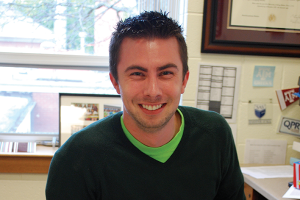 In his new position at Texas A&M, his alma mater, Fink said he will be an advisor of Class Councils, an organization he was actually a member of.

“Class Councils is like an SGA group that focuses on the traditions of the university, since Texas A&M is very rich in tradition,” Fink said. “It’s one of those moments where it is tough to go, but it’s hard to not see an experience etched in stone.”

Going on his third year of employment at Quinnipiac, Fink said it will not be easy to leave.

“It’s been what dreams are made of,” Fink said. “We have incredible students here and incredible colleagues that I’ve been able to learn from.”

After working so closely with Greek life, Fink said that joining a fraternity or a sorority is the perfect compliment to the academic community.

“I think the leadership opportunities, both in their development and in the actual roles they take, are experiences that can be unmatched,” Fink said. “It’s almost like they’re running a small business.”

With their values and leadership positions available, Fink said Greek organizations ensure that their students are becoming a person of the world.

“Some of those experiences are some of the most paralleled to the world of work,” Fink said. “It’s always about how someone can be a better version of themselves.”

During his time at Quinnipiac, Fink has made multiple changes to Greek life, including moving formal Greek recruitment from the spring to the fall.

“We changed to fall recruitment [this year], which was a huge, huge, huge endeavor,” Fink said. “It worked out beautifully.”

Among the changes he has made, Fink said he helped to strengthen the effectiveness and the abilities of the Panhellenic council.

“We have a large percentage of this population at Quinnipiac that are part of this Panhellenic community, so we knew that their governing council can move mountains here, if effective,” Fink said.

One of the greatest developments he helped create, Fink said, was having the voices of the women of the Panhellenic council be heard.

“A lot of it was instilling the skills in those students leaders,” Fink said. “We needed to develop those, and they also needed to have the confidence that they could become that voice.”

Junior Liz Falcigno, member of Alpha Delta Pi, said she will remember Fink for his positive attitude during recruitment.

“He gave off a super positive energy during recruitment last year,” Falcigno said. “He was just positive about everything he was doing.”

Senior Theo Siggelakis, member of the Interfraternity Council, said `Fink was always there to give advice and guidance in a time of need.

“He helped the women make great strides in their Greek community,” Siggelakis said. “His presence in the community will be missed.”

Although he was highly involved and implemented various changes in Greek life, Fink said it is not about the impact he has made, but what the students can do with their skills.

“The best I could do is give them the tools to allow them to change the world,” Fink said. “If there’s ever an impact, I’m proud to be in the shadows.”