Sixth-year PT students hike for a cause

Oct. 2 marks the 30th day that third-year graduate student Daniel Munkley and 22 others consecutively hiked the mountain, Sleeping Giant. What began as a competition between Munkley and his roommate during their senior year, turned into an event for sixth-year physical therapy students to raise money for the Make A Wish Foundation. 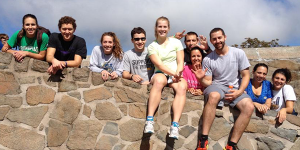 As seniors, Munkley and his roommate were simply bored one day, so they decided to challenge each other to hike the mountain every day for 30 days.

“It just turned out to be a lot of fun,” Munkley said.

One day after class a professor heard him talking about his adventure and asked if he was doing it to raise money for something. Two years ago when his professor said this, Munkley actually laughed at the idea. He was just doing this to keep himself entertained; why would he go further than that?

This past summer, however, this joke became his dream. He didn’t care how many people would participate and thought that even if he got five or six other classmates to involved, he would be able to send some money to a good cause.

“People could make what they wanted out of it; run it, walk it, crawl it, go backward, whatever,” Munkley said.

Each person paid $1 for each day.

They would all hike the mountain everyday and take pictures to document their experience. Tough schedules made it impossible for them to all go together, so they hiked in small groups. Munkley says it was fun because they sometimes saw each other during their hike. Munkley lit up as he recalled seeing some of his friends at a different peak. Once they noticed each other, they started a chant and let their voices be heard throughout the State Park.

Using the Internet program GoFundMe.com, Munkley created a place for friends, family and anyone else interested to donate money. On this site, Munkley posted pictures archiving how people were doing each day so people could see their progress as they donated.

Currently, Munkley and his team have raised more than $1,600 for the Make A Wish Foundation and Munkley says he will continue to keep the site open for donations for a short period of time.

“It’s pretty awesome the support we have got from friends, family, faculty,” Munkley said.

The Make A Wish Foundation is an organization that grants wishes to children with life-threatening medical conditions. The foundation believes that “a wish experience can be a game changer” for these children.

“These kids get their dreams just brought to them in a second and you see them just light up,” Munkley said. “I really think the human spirit is very strong and I think that in terms of healing it can be limitless.”

On average, the foundation grants a wish to a child in the United States and its territories every 38 seconds.

Munkley became interested in the organization through videos that he saw on ESPN. Some days the videos became a motivation for himself and Doerner to go and hike.

Despite the tough challenge all 22 students completed the 30 days.

“We made a 30 day commitment and we hiked the mountain every single day. It’s tough,” Doerner said.

Munkley hopes that this can be an annual event at the start of the year for the rest of the physical therapy classes. Plans are already underway with current fifth year students who hope to make this a reality.