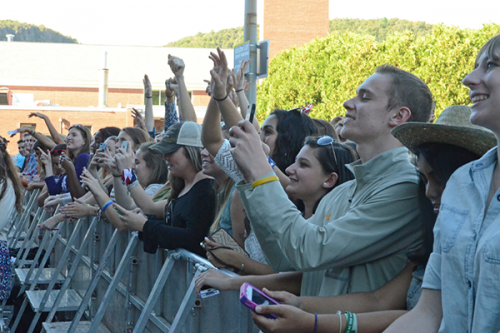 South Lot was filled with more cowboy hats and boots than it had ever seen before, and the crowd that formed almost blurred together from the prevalence of plaid shirts. Combined with the warm, sunny day and the American flags blaring from the hands and clothing of students, Saturday couldn’t have been a better day to premiere the Student Programming Board’s first Fall Fest.

“I love that it was in South Lot, and country is such a good genre that it really brought people together,” senior Julie Ressler said.

The acts were introduced by radio personality Broadway from Connecticut Country 92.5, and began with Sara Haze, who is known for performing shows with Jack’s Mannequin and Hunter Hayes, as well as having music in numerous shows and movies. Haze’s husky voice paid testament to the country genre that inspired the show’s lineup, and after the show she spent time taking pictures with excited students.

Next came Canaan Smith, and with his performance, the energy in the crowd began to creep sky-high. Girls were fanning themselves and vying to catch the attention of the gorgeous singer. Smith spoke and sang with a heavy twang, and a flirtatious glint in his eyes that charmed even audience members who hadn’t known of him before.

In an interview before the show, Smith spoke about his close friendship with Tyler Hubbard of Florida Georgia Line, a country duo who have become wildly popular in recent months. Hubbard and Smith met in college at Belmont University, and have remained close ever since.

“We were both passionate about music, but in the process of writing songs together we had so much fun just goofing off, and we decided to just keep doing it,” Smith said. “We got better and better, and just got lucky that Jason Aldean thought one of our songs was good enough to put on his album.”

Smith spent the days before Fall Fest on the road with Florida Georgia Lane, writing and recording new music, and says that we may be hearing his voice chime in on their next album.

Most attendees were unfamiliar with Eric Paslay but aren’t likely to forget the 6-foot-4 redhead with a loveable presence and soulful voice. Paslay, who has opened tours for country giants Little Big Town, The Eli Young Band and Jake Owen, earned screams from the crowd as he performed “Country Side of Heaven.”

Another of Paslay’s songs, “Friday Night,” is moving up the country charts and also got more girls swooning during the performance. The adorable singer smiled widely and spent more time than anyone meeting fans when he came off stage. One lucky fan even got him to record a video of himself singing on her phone.

“The crowd was awesome,” Paslay said. “For the first year it was amazing. I don’t think any artist would not want to come back.”

Finally Love and Theft took the stage, and the barrier holding back the crowd was strained with girls — and guys — trying to get closer to the performers. Love and Theft played many of their popular songs, mixed in with covers including a mash-up of Tom Petty’s “Won’t Back Down” and Springsteen’s “Born in the USA.”

“Love and Theft is definitely the best band that Quinnipiac has gotten in my four-years here,” said senior Jayme Petronchak.

They joked with the crowd, and even sang “Happy Birthday” to dozens of crowd-members who claimed the day as theirs. The audience was laughing, singing along and cheering throughout the entire performance.

“Country music is the biggest it’s ever been, right now, and it’s because of all the different sides of it,” Love and Theft’s Stephen Barker Liles said. “That’s one of the reasons we love being a part of it.”

After welcoming a gaggle of Quinnipiac girls on stage to dance, the band finished up the show with its smash hit “Angel Eyes” before being pulled into a gaggle of fans who demanded photos and signatures.

Though the crowd began to thin, many people were hanging around for the next hour after the show ended, just hoping for a chance to meet the musicians.

To listen to interviews with the artists, visit the Electric Barnyard blog through Country 92-5.