UPDATE: Quinnipiac women’s rugby game vs. Army back on 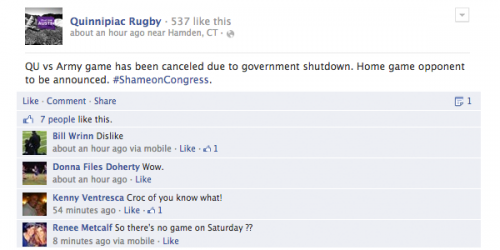 UPDATE 10/3: Quinnipiac women’s rugby has since officially announced that the game has been postponed to an unannounced date.

The Quinnipiac women’s rugby game vs. Army, originally scheduled for Saturday, Oct. 5, has been canceled due to the government shutdown, according to the Quinnipiac rugby Facebook page.

As of Oct. 1, the United States government has shut down due to a disagreement on a spending plan for the upcoming fiscal year. This has resulted in the closure of several government services and agencies, as well as possible cancellations of future Army, Navy and Air Force NCAA athletic contests.

The Defense Department suspended athletic competition at the service academies due to the shutdown, according to the Associated Press.

Senior lock Melissa Condo, a political science major who participated in Quinnipiac’s presidential public service fellowship program over the summer, shared the post and said, “Well, looks like someone you know has been personally effected!!”

The Bobcats (4-2) beat the University of Virginia on Sept. 28 in their last game and beat Air Force 35-14 earlier this season.

Army canceled its men’s soccer game vs. LIU-Brooklyn scheduled for Oct. 1 “in accordance with a directive from the Department of Defense,” and also canceled a women’s soccer and a volleyball game.