Biking for a cause

The brothers of the Pi Kappa Phi fraternity spent the past three days riding stationary bikes on Bobcat Way Lawn to raise awareness and money for their philanthropy Push America. 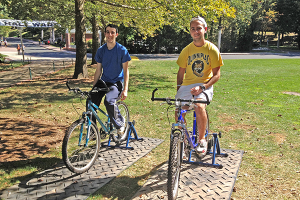 Beginning Monday, Sept. 30 until today, the fraternity held its annual Push America Festival from 8 a.m. to 10 p.m. The fraternity has one bike for the brothers, who take turns riding for an hour. The second bike is for all students who can donate $3 to ride for 15 minutes and $10 to ride for one hour.

“Last year we did something very similar,” Pi Kappa Phi Philanthropy Chair Joe Almeida said. “We had the bikes out on the Bobcat lawn and we just rode them for two days straight and we really just looked for donations and that was it, so we kind of wanted to build off of that and create something bigger and actually give back to people who donate.”

The fraternity is holding a raffle as part of the event. Also, if students donate a dollar, a brother will do five push-ups.

Pi Kappa Phi also involved other Greek life organizations by creating a Google doc for Greek life members to sign up to ride the bike.

“It’s really promising and it’s really great to have their support,” Almeida said.

Almeida hopes the fraternity will raise $4,000 for Push America, an organization dedicated to helping people with mental and physical disabilities.

“The idea of being on the bikes for this long is to really ride for people who can’t ride themselves,” Almeida said. “It’s very symbolic of helping [people with disabilities] out and showing that really the only disability out there is a bad attitude. That’s kind of our motto.”

“I feel great,” he said. “We’re helping others that can’t do it themselves. We’re raising awareness and money for people who are disabled.”

The festival was inspired by the national Pi Kappa Phi’s Journey of Hope cross-country bike race and Gear Up Florida race around Florida.

“This is really in that spirit, so a lot of chapters across the country do this for that reason,” Almeida said.