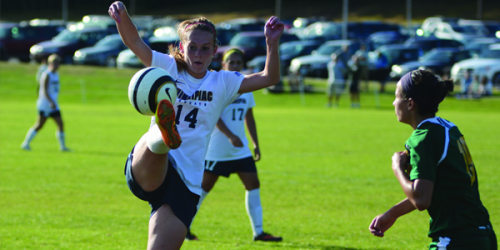 Meet Jessica Fontaine for the first time, and encounter her shy, reserved and humble persona. When she puts on her warm-ups, discover she is a Division I soccer player. Find her in the classroom, attempting to blend in like any other college student. Fontaine is hiding a wealth of success, rivaled by few, impressive to all.

The newest starting forward and freshman for the Quinnipiac women’s soccer team has accepted the responsibilities that came with such success early on. 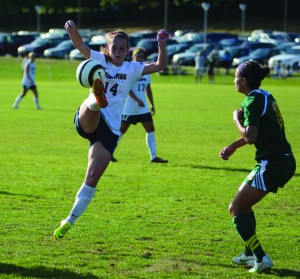 “It was an honor,” Fontaine said in regards to receiving all the accolades. “But it definitely put a lot of pressure on me.”

Fontaine’s high school career at Northwest Catholic High School was nothing short of a spectacle. She helped lead her team to a 38-0-2 record and a No. 1 ranking in the state of Connecticut in her last two seasons, and an overall career record of 73-4-3. Her club team, CFC United, won the Connecticut State Cup Championship in 2010, 2012 and 2013.

As if her accomplishments on the field weren’t enough, she was a star in the classroom as well. Fontaine was a four-time All-Academic, member of the National Honors Society, graduated with highest honors, and received the President’s Academic Award for Outstanding Academic Excellence.

Humble in speech and action, Fontaine would never let anyone believe the high school accomplishments on the field were because of her talents. Teamwork is what she believes was the key to success.

“It had to do with the chemistry of the team,” Fontaine said. “Everyone was a friend on and off the field. No one ever got into arguments or anything like that. It just came together on the field.”

Clearly, it all gelled together as three state championships and multiple All-Americans, which Fontaine sees as the most memorable aspects of her high school career, came out of it.

Quinnipiac head coach Dave Clarke knew he found a gem when he scouted Fontaine. Talent, however, was not the first thing on his mind when he discovered her.

“The first thing for us was the academic fit,” Clarke said. “A player like Jessica, in reality, should be at a school like UConn or some of the bigger national programs.”

Predictably, academics are not what get you on a Division I athletic team. Noting that he had seen Fontaine play for her club team over the span of a few years, Clarke was able to see steady improvement and someone he thought would be a perfect fit at Quinnipiac.

“She’s a goal scorer, predator, smart player and a strong player,” Clarke said. “It was a good fit all-around athletically, personality-wise and academically.”

Clarke’s expectation for the new starting forward is quite simple: score.

“Hopefully she is going to score goals on a consistent basis. She has that potential,” Clarke said. “A lot of freshmen, when they start, don’t have to try and carry the team. When she adjusts to the physicality of the college game, the mental demands that it places upon you, and the attention that comes with it she will be fine.”

Clarke made his expectations clear for his new talented forward. Fontaine, along with wanting her team to be atop the Metro Atlantic Athletic Conference and making it to the conference tournament, shares similar aspirations to her coach.

“I want to be the leading scorer on the team,” Fontaine said.

Though Fontaine opted for Quinnipiac due to the athletic experience, academics played the main role in her decision.

“Quinnipiac had the program I wanted to get into,” said Fontaine, a physical therapy major. “The Division I athletics was a bonus. It also wasn’t too far from home.”

This season, Fontaine has a team-leading three assists, while her two goals are tied for first with Aine McKeever and Beck Kiting. Fontaine’s eight shots on goal lead the rest of the team as well. Still, Fontaine was not expecting to have this kind of a start to her college career.

“It was kind of shocking,” Fontaine said about her early success. “I wasn’t really expecting to make an impact this early. I’m happy with it so far.”