Quinnipiac and Yale. Two rivals located on Whitney Avenue. Fans from both universities were standing on their feet and stomping on the metal bleachers. A contest with an intensity level so high, one would immediately assume the scene was TD Bank Sports Center or Ingalls Rink. 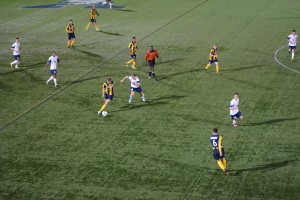 Only it wasn’t an ice hockey game. It was a soccer match held at Reese Stadium Saturday evening in New Haven, with Yale’s trademark ivy budding the outer brick walls in the shadow of the famed Yale Bowl.

Ice hockey isn’t the only sport where the Bobcats and Bulldogs have battled. Since September 2011, Quinnipiac, now a member of the Metro Atlantic Athletic Conference, and Yale, a long-time Ivy League school, have squared off in basketball, field hockey and basketball, among others.

Saturday was the Quinnipiac men’s soccer team’s turn, representing a chance to reverse its early-season struggles.

Coming into the night, Quinnipiac was just 1-3-3 overall, and the contest was also an opportunity to enter MAAC play on a high note, Yale being the final non-conference game of 2013.

“It’s pumped up as a rivalry,” Quinnipiac head coach Eric Da Costa said. “These games always have high emotions, players get up for it.”

Da Costa noticed a different jump in both squad’s steps Saturday night, playing with a better-than-average level of energy out of the locker room.

“From that first whistle, it looked like a horse race,” Da Costa said, chuckling. “One hundred miles an hour from both teams. The emotions were high. Guys coming out of the gate and just flying.”

The Bobcats jumped out to an early lead in the sixth minute on Simon Hinde’s fifth goal of the season. Representing roughly half of the 612 in attendance, Quinnipiac fans roared as the senior sprinted toward the stands in celebration.

“Our fan support tonight was tremendous,” Da Costa said. “We joked about it in the locker room before the game, having a home game on the road.”

Bobcat fans continued to combat Yale supporters as the game continued, drowning them out as Quinnipiac held to the one-goal lead, especially following the plethora of Bulldog chances in the final minutes.

“Our crowd tonight was bigger than most of our home games,” Da Costa said. “They were vocal. The players feed off that, and it gave us the extra energy we needed.”

Hinde, co-captain and team-leading scorer, celebrated with his teammates following the conclusion of the match, also reflecting on the hard-fought, 1-0 win over the rival on Whitney Ave.

“We like to be the kings of Connecticut,” Hinde joked after the game. “I feel like we’ve done that tonight.”