With spearheaded anti-bullying campaigns, the United States has been advocating the fight against bullying over the past few years, and two Quinnipiac students in particular have taken special interest in these efforts. 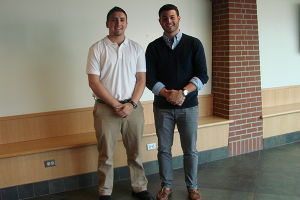 With their recent stamp as a foundation, the coalition looks toward reaching both short-term and long-term goals. They hope to host events around the area to raise money, gain supporters and volunteers.

“What we want to do with the money that we raise with these events is donate them to programs in elementary schools along Long Island so that we could [assist] their anti-bullying programs,” Graziano said.

The organization was also created in efforts to offer therapeutic venues for children who have experienced bullying but cannot necessarily afford to seek help elsewhere.

The idea stemmed from Salamone, the coalition’s executive director, who encountered an incident of bullying at the Good Samaritan Hospital in West Islip, N.Y. There, he witnessed a mentally challenged young man being bullied by a small group of relentless children. The parents were forced to relocate with their son to another area of the waiting room where they sat alone.

“[Salamone] just realized that he had to do something about this and that’s kind of where it sparked,” Graziano said.

Ever since this encounter, the coalition’s executive board was formed. The executive board of eight members is comprised of teachers, students and managers of different backgrounds and different experiences with children and bullying, according to House, a trustee of the corporation and media affairs delegate.

While the corporation is still in its early stages, the members have been working diligently to spread the word and widely establish the coalition. They made progress since the original start-up.

The coalition has just been established and legally documented by the State of New York as a non-profit organization. The coalition also hopes to be tax exempt by the end of October.

The two have been apprehensive towards bringing the cause to Quinnipiac, uncertain of the students’ reactions to it being a Long Island based corporation. Yet, awareness is not limited to Long Island community, Graziano said, and they welcome any support and hope to gain a following here on campus.

The LICAB is also hoping to produce its own statistics and distribute them amongst the schools where the affiliated teachers work.

“It’s something we want to produce ourselves so we can see the actual numbers and the effects [the coalition] has on Long Island,” House said. “We want to bring something back home to Long Island where we were born and raised, so we can see how it’s effecting [the area].”

House is working on fully launching their website, LICAB.org, which currently accepts basic contact information, but is still under construction.

“If you’re interested, just sign up, give us your email and we will contact you with any upcoming events,” House said. “Maybe if we need any hands-on volunteers you can contact us through the site and help.”

House hopes the coalition will grow.

“I started out thinking this was going to be a small impact, but as we keep progressing, I think this is going to be a well-known thing on Long Island that’s going to help probably tens of hundreds of children, hopefully,” he said. “Even if we help one person, that would just be a life changing goal in my mind.”