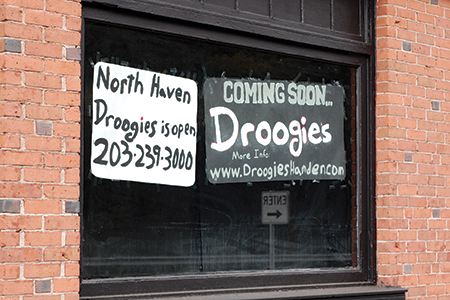 As the university community grows and diversifies, local businesses find themselves specializing menu options and exploiting trends in the Quinnipiac populace to increase revenue. 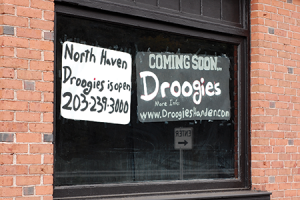 Droogie’s Pizza is moving locations, hoping that they will become even more popular as they try to meet the needs of students.

The current location in North Haven will close Saturday and the new location will open the second week in October. While Droogies is currently nearly three-and-a-half miles away, the new location is less than a half mile from campus. It will be located at 3500 Whitney Ave., next to The People’s Bank.

Droggie’s Pizza’s relocation was due to the North Haven’s plaza owner’s decision to put a bank in Droogie’s place, according to part owner of Droogie’s Peter Drougas.

Students all over campus are also looking forward to the new Droogie’s location opening.

“I love ordering Droogie’s but it always takes forever,” sophomore Robert Dery said. “Now that it will be closer, it won’t take as long to get here.”

Sophomore Justin Kody lit up after hearing that his preferred place to order food is moving closer to campus.

“I’m really excited about the new location,” Kody said. “Droogie’s is my favorite wing hut in town and now I will be able to walk there with my friends.”

Drougas said the new location is not the only new addition. Droogie’s is also extending their hours in order to meet students’ needs. They will now be open until 3 a.m. on the weekends, prolonging the normal closing at 10 p.m.

“It will be easier for students to order online and they can customize what they want,” Drougas said.

Quinnipiac students bring in a great deal of revenue to the business, according to Drougas.

Droogie’s is not the only local business thriving from Quinnipiac students. Ray and Mike’s Deli is another common dining attraction where students can be found.

Ray George is the owner of Ray and Mike’s and has been with his business for 16 years. He says his business has seen the growth of the school firsthand.

Just as Drougas is doing, George says that over the years he has learned to satisfy the needs of Quinnipiac students. After seeing an influx of students from New Jersey 11 years ago, George created more “Jersey type” sandwiches, such as Taylor ham. He also created the Chicken Russian sandwich, which is one of the top-selling sandwiches.

Now George says he is adding many Massachusetts-based sandwiches for the many students from that area.

Drougas and George both agreed that their businesses flourish during move-in week. Drougas said he sees a decrease in sales during the months when students are on summer break. George also sees a decrease during the summer; however, he says landscapers and construction workers become frequent customers.

George says he does believe Quinnipiac students are a majority of his business. In 2012, Ray and Mike’s was voted best off-campus food and Ray and Mike’s is the top place for sales with Q-cash.

“As the semester goes on people use their meal plans at first but then they run out of meal points kind of quickly and then we get much busier,” George said. He also says he frequently sees faculty members coming in and ordering sandwiches.

“I think there are a lot of people in this immediate area now, especially with all of the people that are living off campus,” George said. “Starting out being here from the beginning people know that we are established and where we are. It is almost like a landmark.”