Christopher Ball, director of the Central European Institute and Istvan Szechenyi Chair in International Economics, was inaugurated as the Honorary Consul of Hungary for Connecticut this evening in the School of Law’s Grand Courtroom. 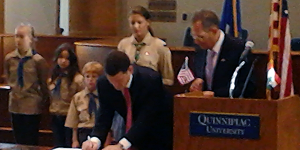 “We know that [Ball] will serve our students, the Connecticut community and will continue to promote the Quinnipiac spirit globally,” Thompson said.

Ball has had a long history with Hungary. In 1994, he worked in foreign policy in Budapest as the Project Director at the Hungarian Atlantic Council for two years.

Ball joined Quinnipiac in 2003 as an assistant economics professor, but his interest in Hungary led him to become director of the Central European Institute and the Istvan Szechenvi Chair in International Economics. In these positions, he works to get scholarships to bring students and faculty to Hungary. He also brings MBA students to Hungary over the summer to learn business practices.

“In many ways they came to me because of all the things I’ve been doing here at Quinnipiac,” Ball said. “My experience at Quinnipiac certainly opened me up to all of these opportunities.”

As Honorary Consul of Hungary, Ball hopes to expand on what he has done as director of the Central European Institute.

“I would like to see some financial support for scholarships for Quinnipiac students to do internships overseas,” Ball said. “At this point it’s been an MBA program and built around that. I’d really really like to see it expand beyond that, to be all encompassing where there are undergrads, there are professors going both ways.” 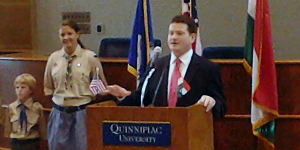 Ball said he believes Quinnipiac should be on the international stage.

“I think this is exactly the kind of thing that was inevitable at Quinnipiac,” he said “I think for Quinnipiac this legitimizes, certifies everything that we’ve been doing.”

“For me this is a real honor,” Ball said. “It’s recognizing a big piece of my life for 20 years. Of all the things that have happened to me and that I’ve done, this is probably the most meaningful and personal to me.”